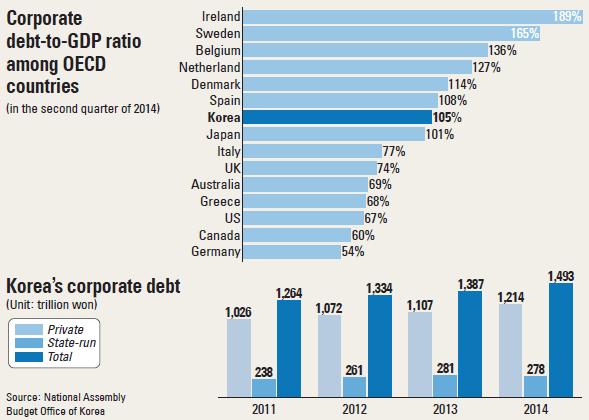 The ratio of Korean companies’ debt to gross domestic product (GDP) ranked seventh among 15 members of the Organization for Economic Cooperation and Development, a Korean National Assembly report showed Monday.

According to a report titled “The current situation of corporate debt and comparisons with other countries,” which was based on a report by McKinsey Global Institute titled “Debt and (Not Much) Deleveraging,” the debt-to-GDP ratio of Korea’s non-financial corporates stood at 105 percent in the second quarter of 2014.

The report was written by the Korean National Assembly Budget Office on the request of an opposition New Politics Alliance for Democracy lawmaker, Oh Jae-sae, and distributed to reporters on Monday.

According to the assembly’s report, Ireland’s companies recorded the highest debt-to-GDP ratio, 189 percent, followed by Sweden’s 165 percent, Belgium’s 136 percent and the Netherlands’ 127 percent.

Japan was lower than South Korea, recording 101 percent. Greece’s was 68 percent and the United States stood at 67 percent.

The McKinsey report included Singapore, which recorded the highest debt-to-GDP ratio for corporates, 201 percent. But in its case, more than two-thirds of companies with more than $1 billion in revenue in the country were foreign companies.

Based on statistics by the Bank of Korea, the report said Korean corporates saw a steady increase in debt since 2011, an 18.4 percent increase among private companies and 16.8 percent for state-owned companies.

State-run companies, accounting for the remaining 19 percent, had 278 trillion won of debt in 2014. The report said most of that debt was in government bonds.

The debt held by private companies has been steadily rising since 2002, the report showed.