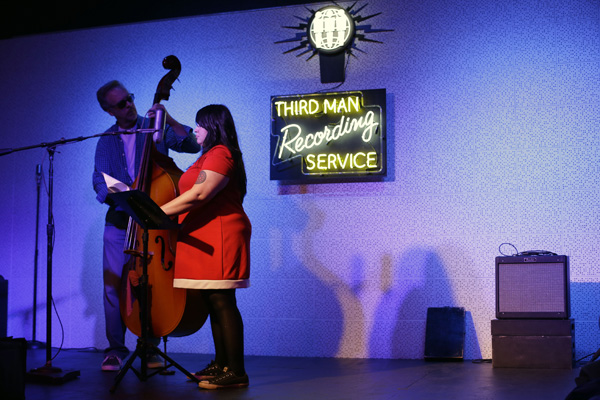 Jana Savanapridi, right, and Jim Cavender, of Huntsville, Ala., make a vinyl recording on Saturday of a song they wrote on the drive to Nashville at Jack White’s Third Man Records on Record Store Day. A limited number of people were able to record a song at the Tennessee studio. [AP/NEWSIS]

NASHVILLE - After anonymously buying Elvis’ first-ever recording at a January auction, rock star Jack White is offering a limited-run vinyl re-release of “My Happiness’’ and “That’s When Your Heartaches Begin’’ at his Third Man Records in Nashville.

The 10-inch, 78-rpm facsimile of the 1953 recording was digitally transferred from the original acetate onto new vinyl discs with no cleanup - pops, crackles and all.

The record is being sold in a plain paper sleeve because that’s “what Elvis would have walked out of Sun with a record in,’’ Blackwell said.

Super-fans camped out in front of Third Man beginning Friday morning to make sure they could get their hands on the Elvis record and other goodies available only for Record Store Day. That included the first commercially available vinyl edition of “Get Behind Me Satan’’ from White’s former band The White Stripes. The original Elvis recording was on display at Third Man as well.

The first four people in line were mother-and-son teams from Cleveland and Indianapolis.

Christina Condor, said her love affair with White and his store began about three years ago when she saw him perform on “Saturday Night Live.’’

“I fell in love with his music and started buying more and more albums,’’ she said. She also introduced her 24-year-old son Maxx Trevino to the scene.

Although she and Trevino make the eight-hour drive from Ohio every few months for special store events, she has glimpsed White only rarely on her trips to Nashville.

“I drove into the curb the first time I saw him,’’ said Condor.

“She dented the bumper,’’ Trevino said. “And there was a Beatles school-girl scream.’’

Nicholas Lynch, who was in line with his mother, Mary Page, said he moderates a Facebook page for collectors of Third Man’s records. He estimated that at least 100 members of the group were in the line of about 700 people waiting for the store’s 10 a.m. opening.

Lynch also was one of about 50 customers who had been able to sign up online to relive the 18-year-old Elvis’ recording experience by cutting his own single on a one-microphone, direct-to-acetate setup in Third Man’s Blue Room.

He planned to play “Baby Please Don’t Go’’ and then morph into the White Stripe’s “Little Bird.’’

Once inside the store, Page said that she, Lynch and Lynch’s girlfriend spent more than $500 on merchandise. That included a Record-Store-Day-only version of the White Stripes album with one red disc and one white disc. It also has a lenticular cover - one of those images that changes as you move it around.

Nonexclusive versions of the White Stripes album and the Elvis record will be released to a wider audience later this year, Blackwell said.

But for collectors like Condor, Trevino, Lynch and Page, waiting in line for 26 hours for the exclusive versions was worth it.