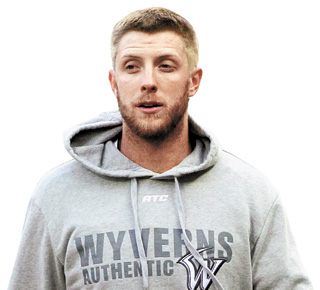 When Sunday’s game between the SK Wyverns and LG Twins was rescheduled because of rain, some blamed it on April showers.

Everyone else looked at Wyvern’s player Merrill Kelly.

The 26-year-old American pitcher has been nicknamed “Rain Kelly” because whenever he’s scheduled to play, rain seems to appear and postpone the game.

Though Kelly wasn’t supposed to play on Sunday, his name has become synonymous with bad weather luck.

Even Wyverns manager Kim Yong-hee jokes that he considers making a dinner appointment when Kelly is scheduled to play.

On April 1, Kelly was scheduled to make his first appearance in Korea Baseball Organization (KBO) League against the Kia Tigers. But the previous day’s game was cancelled due to rain, shifting the order of starting pitchers and pushing Kelly’s own start back to April 2.

Although rain was forecast on April 2, not a single rain drop was reported at SK Happy Dream Stadium in Incheon until the game began. Kelly was pitching well, allowing only one run in four innings, but the umpires decided to cancel the game after a downpour started at the bottom of the fourth inning.

Rain is not the only weather that Kelly has attracted. In a preseason game against the Hanwha Eagles in Daejeon on March 10, the right-hander was also scheduled to pitch, but the game was cancelled due to a cold snap.

The next day, Kelly pitched for five innings while it snowed, even as the game was temporarily stopped due to the weather.

The Texan native said that it was “interesting” to pitch on a snowy day, but admitted that bad weather has become his main concern. According to Kelly’s translator, the first thing the pitcher does in the morning is check the forecast.

“I have never experienced this kind of situation in the United States,” said Kelly last Tuesday after his start was postponed again due to rain. “Maybe God in Korea is testing me.”

The weather has permitted only two games for Kelly so far. But while making it to the mound hasn’t been easy, collecting his first win has been even tougher.

Kelly made his KBO League debut on April 8 against KT Wiz in Incheon and allowed only one run in 6 and 2/3 innings, collecting eight strike outs. However, the Wyverns’ batting went sluggish and he failed to collect a win, despite the team’s 2-1 victory in the end.

His second start was against the Nexen Heroes on April 15, after rain cancelled the game the previous day. Kelly did allow a three-run home run to Yoo Han-joon in the top of the fourth inning, but that was the only score he gave up. The pitcher allowed six hits (including a home run), one base-on-balls and collected six strike outs in seven innings.

Kelly stepped off the mound with the Wyverns leading 4-3, but the next pitcher, Jung Woo-ram, gave up three runs. The Wyverns lost 6-4.

Foreign players haven’t performed well with the Wyverns in the past, but the team has big hopes for Kelly. The pitcher went 39-26 with a 3.40 ERA in the minor leagues in the United States. He is also currently the youngest foreign player in the KBO.

Kelly may not be able to control the weather, but the Wyverns staff say that he’s very disciplined about his body condition; he always uses foam rollers to massage and maintain his muscles.

“Kelly really takes good care of his body as a professional player,” said Park Chang-min, the Wyverns’ assistant coach who manages players’ condition. “If he feels something wrong with self diagnosis, he does essential training voluntarily.”