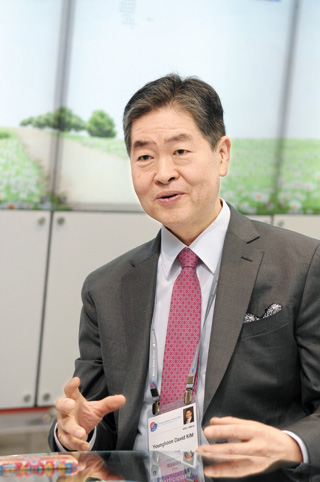 Daesung Group Chairman Younghoon David Kim at an interview with Korea JoongAng Daily last Thursday at the 7th World Water Forum, during which he participated as the co-chairman of national organizing committee. By Lee Seong-soo

To prepare for future shortages of various natural resources and food, closer cooperation and joint technology development between the water and energy sectors is essential, said Daesung Group Chairman Younghoon David Kim, at an interview with the Korea JoongAng Daily last Thursday at the 7th World Water Forum. He served as the co-chairman of the national organizing committee.

Kim explained such joint works are vital, because efficient management of other natural resources like water is impossible without energy.

“The interlink of energy and water becomes even stronger as water increasingly becomes a scarce resource,” Kim said. “One of the largest tasks for all of us is to come up with technologies and policies to minimize the amount of water required for energy generation processes and to maximize energy efficiency in producing water.

“Without technology development, the nexus of among water, food and energy may fall into a vicious circle, in which the depletion of one source comes earlier due to production of the other source. Developing energy efficient technologies to prevent such situations is our job, and is possible through cooperation with the water sector.”

In line with such philosophy, Kim said he hopes to boost cooperation between water and energy sectors when he inaugurates as the chair of World Energy Council next year.

Q. You’re the CEO of an energy company, but how did you become the co-chairman of the national organizing committee for the 7th World Water Forum?

A. Nowadays, it is a global trend that water-related experts are expanding cooperation with other sectors - not just with energy sector but even energy and agriculture - because water is an essential factor in producing energy and food. I think I was picked as a co-chair of the water forum this time as part of the water sector’s initiative to further boost cooperation with the energy sector. I’ve personally worked on enhancing the nexus among the three factors, water, energy and food, through Daesung Group’s business projects and on my post as the co-chairman of World Energy Council.

The close relationship between water and energy is deeper than most of us think. The history goes back a few centuries ago, when people generated energy to mills to produce food, and when James Watt fueled the Industrial Revolution by widely spreading steam engines that were powered with boiled water.

Through such uses, almost 15 percent of the global water consumption happens at these power plants. Water shortage may have a negative impact on energy businesses like ours.

On the other hand, producing water nowadays requires energy - for example, in the process of desalinating seawater, processing waste water to reuse it, and sending the drinkable water throughout regions in need of water. This shows us that the interlink of energy and water becomes even stronger as water increasingly becomes a scarce resource.

As the head of World Energy Council, what is the role of energy in alleviating global problems caused by shortages of natural resources?

As I also talked about this issue at one of the concluding sessions during the recently ended 7th World Water Forum, one of the largest tasks for all of us is to come up with technologies and policies to minimize the amount of water required at energy generation processes and to maximize energy efficiency in producing water.

The key in resolving natural resource shortage problems is technology. Without technological development, the nexus of water, food and energy may fall into a vicious cycle, in which the depletion of one source comes earlier due to production of the other source. Developing energy efficient technologies to prevent such situations is our job, and is possible through cooperation with water sectors.

Such discussions have been exchanged in the past World Water Forums, but at the 7th Forum, the energy and water sectors actually pledged to start streamlining each group’s policy and R&D projects with similar goals, and to start joint R&D projects in energy efficiency. The action plans will be reviewed in future conference sessions of the World Water Council as well as the World Energy Council.

Water, energy and food are three most crucial factors in human lives, as well as holds high risks of getting scarce in the future.

Many international organizations expect that the exploding population will eventually result in 60 percent higher food demand by 2050 than now, further boosting demand on water and energy.

Like UN Secretary General Ban Ki-moon mentioned that energy-related technologies’ development can be the “golden thread” of solving water and food shortage problems, I think our job [in the energy sector] lies in coming up with more sustainable energy sources and advancing efficiency of the process.

How do you hope to contribute to solving natural resource shortage issues in the future?

So far, Daesung Group has developed a water-energy integrated generation system and done business for the past decade in developing countries that suffer lack of basic infrastructures, like Mongolia, Uzbekistan, Kazakhstan and Bangladesh. I hope to spread this system to more countries and regions in need, and develop more projects like this with the global energy companies.

Those countries mostly struggled due to water and electricity shortages, because they have large deserts and regions of extreme weather, so that population density is very low and the government-led electricity infrastructures don’t reach.

In those regions, we built a system called SolarWin, in which wind or solar power plants are connected to the energy storage system, so that electricity is supplied throughout the year, and use the energy in pumping up the groundwater to be stored inside a dam. The contained water is both purified for drinking and connected to fields for irrigation. It is one of the flagship projects that the World Energy Council is paying attention.