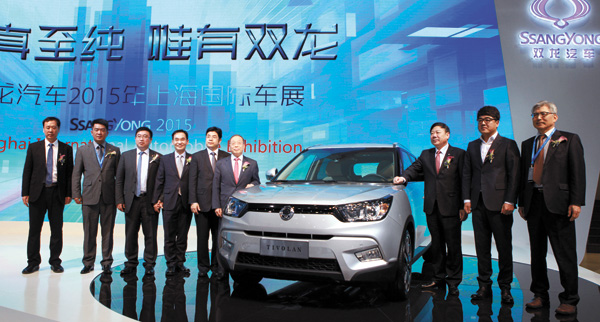 With their hands on the company’s red-hot Tivoli, Ssangyong Motor CEO Choi Johng-sik, left, and Pang Qinghua, chairman of China sales and distributor Pang Da Automobile Trade, join other company executives on Monday at the Shanghai International Automobile Industry Exhibition. The small SUV will be called the Tivolan in China. Provided by Ssangyong Motor

As the 2015 Shanghai International Automobile Industry Exhibition got under way Monday with a two-day press day event, Korea’s leading automaker, Hyundai Motor, and many other foreign brands are in a race to expand their business in China, the world’s biggest car market.

Though the event isn’t recognized by the Paris-based International Automobile Association (IAA), it is the grandest motor show in the world in terms of scale, even bigger than the five largest IAA-recognized motor shows in Frankfurt, Detroit, Paris, Tokyo and Geneva.

In the Shanghai event that runs through April 29, a total of 1,343 cars, including 109 world premier models, swill be introduced in 12 exhibition halls covering an area of 350,000 square meters (86 acres) with about 2,000 automakers and parts manufactures from 18 nations, including Korea, the United States, Germany and Japan. About 500 cars were displayed in Detroit in January.

One of the most significant issues for the Shanghai event is how automakers will attract consumers in China, where the popularity of SUVs is accelerating and the environmentally friendly car industry is growing rapidly as Beijing tries to get the country’s pollution problems under control. 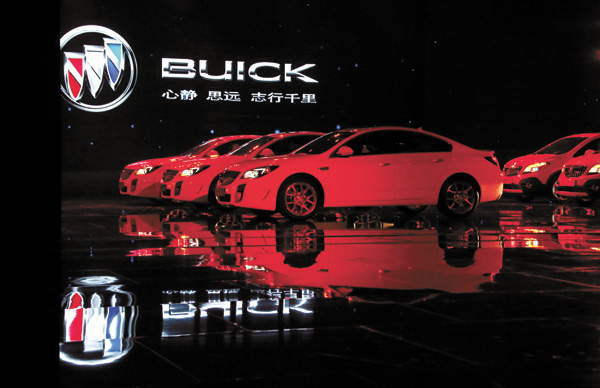 Buick Veranos made by General Motors are on display at a media event for the 16th Shanghai International Automobile Industry Exhibition. [BLOOMBERG]

Korean automakers in China are focused on attracting SUV-lovers. Hyundai Motor said Monday it unveiled a new Tucson SUV designed specifically for the Chinese market. The company said it will start manufacturing the model from the second half of this year in China to complete its SUV lineup, along with the ix25, ix35, Santa Fe and Grand Santa Fe.

The model adopts the company’s signature Fluidic Sculpture 2.0 design and added a gold-citrus color favored by Chinese and mesh grille. The model will be available with two engines - the 2.0 GDI and the 1.6 Turbo GDI that comes with a seven-speed dual clutch transmission.

The Chinese car market grew 6.8 percent last year from 2013 to 23.49 million cars sold, more than any country in the world, and is expected to increase 7.2 percent this year to 25.18 million.

SUV sales grew 36.4 percent last year to 4.09 million and are expected to be up 25 percent this year to 5.1 million, according to industry data.

Ssangyong Motor, the nation’s smallest carmaker that has been riding high on the success of its new Tivoli small SUV in Korea, unveiled the model in China at the Shanghai show. Ssangyong is determined to expand its business in the country as sales in Russia, which was one of the company’s biggest export markets, are expected to plummet about 40 percent this year due to devaluation of the ruble. The company said it will start selling the 1.6-liter gasoline model under the name Tivolan in June and add the diesel and all-wheel drive models later. The company also will display its two other popular SUVs: the Korando C and Actyon.

“This is a big opportunity for us as China’s SUV market is growing fast every year,” said CEO Choi Johng-sik of Ssangyong. “We will try to expand our business in the small SUV market with the Tivoli.”

Other big-name foreign brands have jumped into the SUV war, with Mercedes-Benz displaying its compact SUV, the GLC Coupe concept that will succeed the GLK and compete with BMW’s X4. Volvo unveiled its large XC90 Excellence SUV, the luxury version of the XC90 that the company will start selling in the second half this year.

China also is becoming the world’s biggest environmentally friendly car market, as the government recently declared war against air pollution. The government said taxes on green cars will be reduced through 2017, and it will increase the number of such vehicles at public institutions by 30 percent by next year. According to industry data, sales of electric vehicles, for instance, are expected to increase from 70,000 last year to 180,000 this year and 250,000 in 2016.

Ssangyong brought the Tivoli EVR electric vehicle with range-extender, which it unveiled in March at the Geneva Motor Show.

BMW, which has been leading the green car industry, introduced the X5 xDrive40e, a PHEV SUV, which can go 31 kilometers (19 miles) on a full charge using only its electric motor.

Audi unveiled the PHEV concept Prologue Allroad, which the company says can get 41.8 kilometers per liter (117 miles per gallon) under the European standard.

Korean parts makers also are trying to expand business through the Shanghai event.

Kumho Tire said it signed a sponsorship contract with China Touring Car Championship, the biggest motor sports organization in the country, to exclusively supply tires for races through 2018. In Shanghai, the Kumho Tire will display 10 products, including the tire favored by local consumers such as the Ecsta PS91, HS81 and Solus HS61. The company attracted media attention with actress Liu Yifei introducing the Ecsta and Solus.

Samsung SDI displayed battery cells, modules and packs for electric vehicles, as well as other products.

The company introduced the 37Ah and 94Ah battery cells, which it will start manufacturing at its plant in Xi-an plant in China that is under construction and scheduled to be completed by the end of this year.