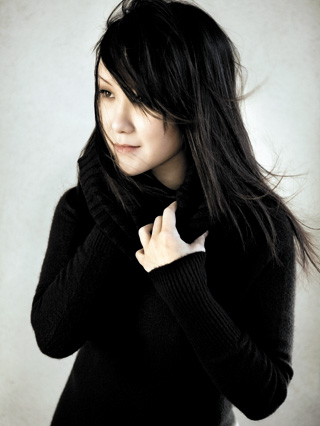 Pianist Klara Min learned one of her biggest life lessons to date in her eight years as the artistic director of the New York Concert Artists & Associates (NYCA): You need to know why you do what you do.

“If you don’t believe in it, no one else will believe in it with you,” she told the Korea JoongAng Daily in a recent interview.

The 39-year-old founded the NYCA, a society for young musicians, in 2008 with the belief that the artists themselves should be able to make the final creative decisions.

NYCA receives most of its funding from individual patrons, and the artists discuss their concerts and projects together in regular meetings.

“You need good people around you,” Min said.

“People always come first, and then the work.”

Over the years, NYCA has had a number of “good people” as patrons, and later this month the NYCA will host an event to draw more attention around its cause.

On April 27, NYCA is set to hold its first official fund-raising gala, a concert entitled “New Horizon” at the Kaufman Music Center in New York City. Soloists at the concert include pianist Alberto Nose and cellist Joshua Roman.

The evening will be hosted by Elliott Forrest, broadcaster and producer at WQXR, an American classical radio station.

Ahead of the organization’s big day, the Korea JoongAng Daily talked with the Seoul-born musician via e-mail to learn more about the NYCA, her thoughts on music and Korea.

Min was born in Korea and raised here until she was 10. She lived in Japan for several years before moving to New York at 17.

“I am Korean no matter what, wherever I live,” she said.

Q. It’s interesting how NYCA gets most of its funding from individual patrons.

A. Yes, unlike South Korea or Europe, most medium-size music organizations in New York have support from individuals. In Europe, the governments mainly help such organizations. What makes New York different from many other countries or cities is that there are many individual donors and foundations that are built and named after those individuals. [One of our] major sponsors for many years has been a Jewish donor from the America -Israel Cultural Foundation, and with this upcoming gala, we are receiving more interest from potential donors.

What are your thoughts on the status of Korean classical musicians in the international arena?

The level of Korean classical musicians is exceptional. I really believe that Koreans are deeply artistic people. Perhaps it is our sad history that has made us so expressive and emotional. What is lacking among the musicians who study abroad is that openness to other cultures. I have seen many exceptional pianists who come to study abroad, then they go back without really acquiring another culture. As an artist, it is essential to be able to adopt and learn [about] different cultures in order to understand the background of music.

Do you think being Korean-American affected who you are as a pianist? If so, how?

Yes. I was born in Seoul, spent my childhood in Japan, then spent more than half my life in New York, and also studied in Germany. For me, the most exciting part of life [has been] to learn about different cultures, languages, food, music, people, and it is absolutely essential for musicians to see the world to have broader perspectives. And it definitely affects your playing and the way you are as a musician.

Can you elaborate more on what “being Korean” means to someone like you who has lived and worked abroad for so long?

People I meet on an everyday basis are non-Koreans, and they will always see me as Korean anyway. I think that true patriotism starts with how you live everyday life, how I do my best. But learning how to blend with other nations and cultures makes us grow more, as it enables us to realize many things from outside perspectives. One note (in music) has no meaning, but when it comes together with other notes, it has its own function, whether it is harmony or dissonance. Blending only makes our identity stronger.

What are your goals for this year and what else do you hope to do with NYCA?

My personal goal as a pianist is to release a recording with the Steinway & Sons label in the fall with works by Alexander Nikolayevich Scriabin. As for NYCA, it has been growing internationally and getting attention from many musicians. I hope that it continues to be a stepping stone for musicians and a platform for many pianists.