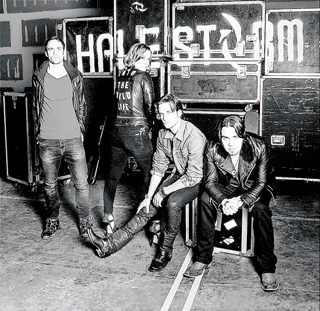 “Into the Wild Life”

Grammy-winning rock band Halestorm is out with its third studio album, “Into the Wild Life,’’ which contains 13 tracks of edge-free power rock, spurred on by Lzzy Hale’s strong vocals - if anything else.

It’s not that Halestorm doesn’t have musical chops - it’s there in spades and the band is varied, accomplished and tight, but the songs themselves are highly formulaic and rely on too many tired tricks of the big rock trade. Hale’s voice is the centerpiece, strong and raging at times, and gravelly and full of emotion at others. On “Dear Daughter,’’ Hale plays it perfectly while pitching individuality and perseverance to her “daughter’’ in the lyrics.

But mostly we’ve got Hale delivering vocal bombast. She screams on “Sick Individual,’’ shrieks on “Mayhem’’ and comes on brass and bawdy on “Apocalyptic,’’ an over-the-top track that is perhaps the album’s best just because it is so in sync with the band’s aim.

Halestorm is powerful enough to play a big hit earworm song, but remains unlikely to pen one. “Into the Wild Life’’ isn’t nearly as wild as it thinks.
AP