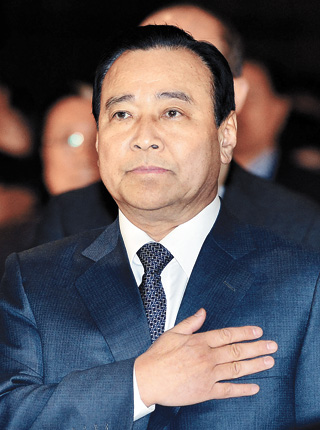 Prime Minister Lee Wan-koo attends a ceremony to mark the Day of Persons with Disabilities on Monday in Yeongdeungpo District, western Seoul.[NEWSIS]

A political firestorm gathered force in the National Assembly Monday as the main opposition party prepared a motion to remove the Park Geun-hye administration’s prime minister over a payoff scandal.

“The people can’t wait any longer,” Chairman Moon Jae-in of the New Politics Alliance for Democracy (NPAD) said Monday. “For the sake of a fair investigation and to minimize impairment of state affairs, we will push forward a motion to recommend the president to fire her prime minister.”

President Park named Lee Wan-koo, a politician who built his career in the Chungcheong region by climbing his way up from police chief in the small village of Hongseong, as the prime minister in February after a series of botched nominations for the post. The former South Chungcheong governor, who also served three terms in the legislature, has been implicated in a snowballing scandal over payoffs by Sung Wan-jong, a construction tycoon-turned-politician who committed suicide earlier this month amid a corruption investigation.

Sung, former head of Keangnam Enterprises, claimed that he had given 30 million won ($27,786) to Lee on April 4, 2013. The money was used to fund Lee’s campaign in a legislative by-election, Sung said, describing Lee as “greedy” and “corrupt.” Sung also said it was hypocrisy for Lee to champion the Park government’s war against corruption.

Moon said it will dent the country’s reputation if a serving prime minister is probed as a suspect. “Although we asked the prime minister and the Saenuri Party to make a decision by last weekend, the ruling party is just trying to buy time. It’s a shame,” he said.

The opposition leader said the motion to recommend that Park fire Lee will diminish the political burden on her. He urged the ruling party to support the move.

Later in the day, the NPAD and the Saenuri Party sat down to discuss the motion. Rep. Ahn Gyu-back, deputy chief negotiator of the NPAD, told Saenuri counterpart Cho Hae-jin that the motion will be introduced either on Wednesday or Thursday for a review at the plenary session on Thursday. Ahn also proposed that an extra session should be scheduled on Friday to vote on it.

The negotiations, however, broke down as the Saenuri Party refused to schedule the Friday vote.

When a motion to recommend the dismissal of the prime minister is introduced to the legislature, it automatically advances to the succeeding plenary session. The legislature already scheduled plenary sessions on Thursday, April 30 and May 6. Once it reaches the main session, a vote must take place within 72 hours. If not, the motion will lapse.

While the NPAD has no problem introducing the motion, it does not have enough lawmakers for its passage. The legislature currently has 294 lawmakers, with the ruling Saenuri Party occupying 157 seats.

The motion is not legally binding, but it puts political pressure on the president.

Before her departure for a 12-day Latin America trip last Thursday, President Park met with Saenuri Chairman Kim Moo-sung and said she will decide the fate of Lee after her return on Monday.

The Saenuri Party said that it will wait for Park’s return. “The president asked for a few days, and I believe the opposition party is being unreasonable in terms of political morals,” Kim said Monday. “I am pleading with Moon and NPAD lawmakers. The president will be here soon if they will wait, and everything will be resolved.”

As lawmakers wrestle with a plan to fire him, the predicament of the prime minister grew deeper. According to a special team of prosecutors investigating the scandal, Lee and Sung had about 217 phone calls with each other over the past one year.

Although Lee has vehemently denied that Sung was close to him, the facts suggested otherwise. According to the prosecution, Sung telephoned Lee 153 times while Lee telephoned Sung 64 times.