We led a happy life together for 64 years until she passed away last Feb. 21. Park Chung Hee, Young-ok’s uncle, did not make it to the wedding because he was stationed at the frontline as chief of staff for the 9th division. Instead, he sent a congratulatory letter and a box of beef to feed everyone at the wedding.

At the time of my wedding, the war with North Korea was at a critical juncture following the Chinese Army’s intervention. With its vast numbers of troopers in what was called a “human-wave strategy,” the Communist army seized as far south as Osan in Gyeonggi after taking over Seoul once again.

Just as swarms of Chinese soldiers were extending their fronts south, General James Van Fleet was named commander of the U.S. Forces in Korea as well as the commander of the United Nations coalition forces. In the military community, he was known as the best man to counter China’s human-wave warfare tactic. 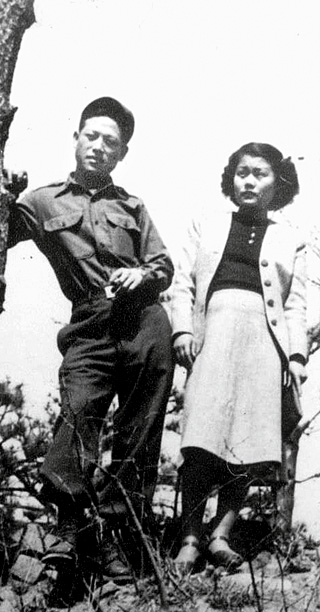 I witnessed the Chinese way of conducting warfare in late 1952 at the frontline. The Chinese used whatever they could get, making thundering sounds as they rushed at our troops.

To counter their numbers, General Van Fleet quadrupled the number of 105-millimeter cannons to bombard our enemies from China. His tactic worked well, giving us some time to recoup our military strength.

It was also General Van Fleet who decided to send a group of bright, young Korean military men to study at Fort Benning in Georgia. I was one of the soldiers privileged to be selected for the program.

I was getting worried I might die in battle, although I had just wed. To be honest, I was relieved when I heard I was going to the United States. I thought maybe I’d survive the war after all.

On Sept. 12, 1951, I got on a ferry from Busan to Japan, where I transferred to the U.S. Navy carrier General John Pope to head for San Francisco. It was when the two Koreas were still engaged in fierce fighting along the frontlines, even though the war, which began in June 1950, had gone on for over a year. I still vividly remember being stunned by the sheer size of the 16,000-ton vessel. It came across to me as the strength of America.

After 11 days of sailing, we arrived in San Francisco, which deeply impressed me, both by its beauty and its modernity. From there, we traveled by train to Fort Benning, a 4,000-kilometer journey.

Seeing the vastness of the continent and the tranquility of everyday life, I said to myself, “This is why America is the superpower.”

As we entered the military outpost in Georgia, we saw a Korean flag raised at the entrance. We were determined that we would strictly abide by the military’s code of conduct, as we were representing our country.

During our six-month training, we learned general military skills such as map-reading and formation tactics. We had a combat drill that involved fighter jets and tanks. The state of Georgia became like heaven to us. Watching American women sun tan on the grass outside, we joked to ourselves, “There is no heaven anywhere else but here.”

American soldiers and the civilians I met there were convinced that the allied forces would prevail in the Korean War. They had unwavering faith that helping others fight for freedom was the duty of an American.

On my way back to Korea by ship, I was preoccupied with the question of if and when we could bequeath to our children a Korea as flourishing as America.

About four months after my return, I was assigned to the 19th regiment of the 6th division on a frontline as a search company commander.

One day, I led 10 soldiers under my command to ambush a group of 10 Chinese soldiers. Through our interrogation, we gained information about the formation of Chinese troops that were besieging the 2nd battalion in Hwacheon, Gangwon. With that information, we could concentrate artillery bombardments on Chinese troops. The 2nd battalion of 500 soldiers finally broke through the siege after it lost nearly 100 men.

About a month after our ambush, we received a call from Park Chung Hee, who told me he had seen my wife, who was waiting for me in war-torn Chuncheon, Gangwon. “She’s saying she came all the way to the frontline after she had heard a rumor that her husband had no chance of surviving the war. You need to go see her.”

As I headed out to see Young-ok, my regiment commander gave me a straw bag of rice as a present for her. My wife was waiting in the middle of the war-torn frontline town with our first child on her back.

“I got on a military freight train from Daegu to Seoul,” she cried. “From Seoul, I asked for a ride on a GMC military truck. I came all the way because I thought I might never see you again.”

I spent a week with my wife at the barracks and then sent her back to Daegu. I think she was the only woman who sought out her husband in the battlefield. No one could have done it but my brave Young-ok.