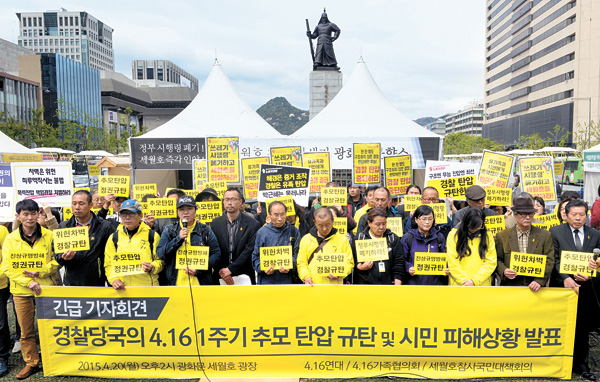 Family members of the sunken Sewol ferry victims hold a press conference at the Gwanghwamun Square in central Seoul on Monday to denounce the crack down by the police on the recent rallies. [NEWSIS]

At Gwanghwamun Gate, the historic site where Koreans staged a non-violent liberation movement on March 1, 1919 and where the headquarters of Japan’s colonial rule was razed on the 50th anniversary of Korea’s liberation in 1995, a national flag was burned by an angry protester in a large demonstration over the Sewol ferry tragedy on Saturday.

To commemorate the first anniversary of the Sewol sinking, which killed more than 300 people after it capsized off the southeastern coast on April 16, 2014, relatives of the victims and civic groups held a huge ceremony on Saturday and marched toward the Gwanghwamun Square to pay tribute at a mourning altar, which led to clashes with riot police.

That’s when the police found a protester burning a Korean flag, which is considered a crime. It said it will identify the man, who was dressed in a hoody and a cap, and consider pursuing charges as well.

At a meeting of the Legislation and Judiciary Committee held at the National Assembly on Monday, the burning of the flag was a topic.

“That behavior is definitely not allowed,” said Justice Minister Hwang Kyo-an, when questioned by lawmakers. “I will make sure [the police] thoroughly investigate the case and punish the suspect accordingly.”

The police held a briefing Monday and announced they’ve launched investigations into protestors who were taken to a police station from the demonstration, while relatives of Sewol victims held a press conference later that day and said the police crackdown was illegal.

“Out of 100 people who were taken on Saturday, we’ve launched investigations on 94 of them except for six high school students who were released,” said Gu Eun-su, Commissioner of the Seoul Metropolitan Police Agency. “We are also planning to request detention warrants for about 10 of them who are believed to have assaulted police officers or led the illegal and violent demonstration.”

The 10 people do not include any of relatives of the Sewol victims, he added.

The police also said that Saturday’s protest resulted in injuries to some 70 police officers and damage done to 71 riot police vehicles. They are currently planning to file a claim for the damages against civic groups that took part in the protest.

The police, who defined the protest over the weekend as violent and illegal, said they will be sterner at rallies scheduled for Friday and Saturday.

The relatives and civic groups that took part in the protest held a press conference at Gwanghwamun Square later Monday and claimed their march was not illegal and that the police crackdown the was.

“Every single police officer was covering his face, and they accused us of obstructing justice when we asked for their names and positions,” said Yoo Gyeong-geun, spokesman of Sewol Family Countermeasure Committee. “We will take every possible measure against illegal activities from the police including filing lawsuits.”

“The police claimed we did not report the rally, but our activities were not ones that need to be reported. It was the police who illegally blocked passersby with barricades made of police vehicles,” he added.

The police, however, explained that police control with the barricades was necessary to maintain order and prevent further clashes.