Visit to Peru paying off for business

Visit to Peru paying off for business 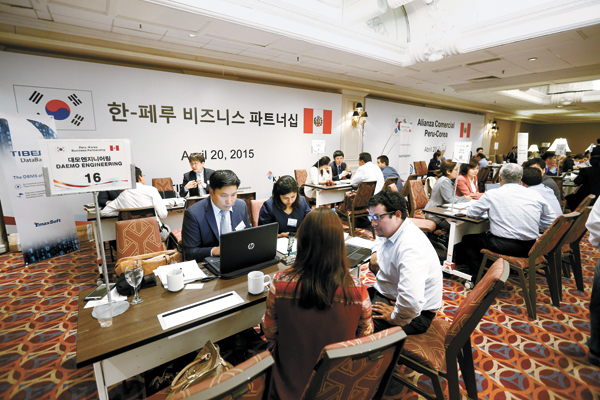 The deals were made at the Korea-Peru Business Forum and one-on-one sessions on Monday hosted by the two trade organizations in the capital of Lima. Nearly 150 Korean businesspeople from 90 companies, including Samsung Electronics, Hyundai Motor and Naver, and about 150 Peruvian counterparts joined the forum.

“Despite the Korea-Peru FTA that took effect in 2012, total trade volume between the two countries still falls short of the potential because of geographical limitations, and trade is limited to a few products such as cars and raw materials,” Park said at the forum, after calling for diversification and a boosting of the trade.

Ehwa Diamond, a midsize minerals manufacturing company, obtained a contract for mineral processing tools worth $1.5 million with a Peruvian drilling company, which works on state-led mineral development. Other small companies, including Future Robot and Daemo Engineering,

According to the Blue House, Gacheon Gil Hospial entered a contract with a Peruvian hospital to jointly build an ICT-enabled telemedicine and health care system in Peru.

Also, 20 business deals have been made via memorandums of understanding mostly in state-led infrastructure projects ranging from a petrochemical R&D complex and subway lines to river restoration projects and electricity distribution infrastructure maintenance.

The Korean ministry will share its R&D complex management model and dispatch researchers to Peru to work in areas like biotechnology, new materials, environmental technologies and information and communications technology. The center will initiate technology-based business cooperation between the two countries.

The two science ministries agreed to another MoU to jointly develop policies related to cyberattacks.