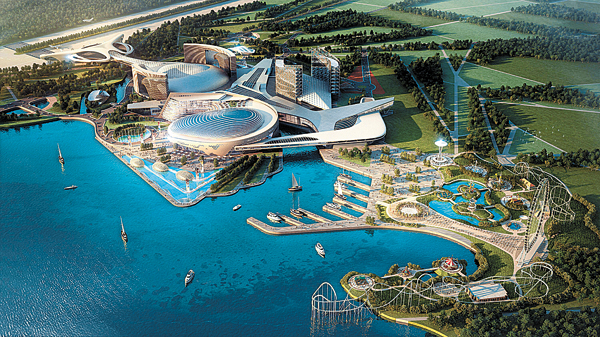 A U.S. casino operator is offering to invest $5 billion to build and operate a first-of-its-kind casino resort connected to Incheon International Airport by 2040.

Kevin Brown, chairman of the Mohegan Tribal Gaming Authority, signed a memorandum of understanding with the president of the Incheon International Airport Corporation, Park Wan-su, at the Grand Hyatt Incheon Hotel on Tuesday, to build a multipurpose resort-oriented entertainment complex for foreigners on a lot of 3.27 million square meters (327 hectares) at the International Business Complex located north of the airport.

The company operates the Mohegan Sun gaming and entertainment complex on a Native American reservation in Connecticut.

According to the Incheon International Airport Corp., the U.S. company will pour $1.6 billion into the first phase of the investment to be completed by 2020, which will include a casino for foreign nationals, a 1,000-room, six-star hotel with 300 VIP rooms, and other entertainment and hospitality facilities.

By 2040, a second investment of $3.4 billion will be made to develop the complex into a world-class tourist destination.

A key part of the complex will be a concert stadium with 20,000 seats. The Mohegan Sun Arena in Connecticut has 10,000 seats.

The stadium will be used particularly for K-pop concerts, according to the corporation.

“We believe if Mohegan Sun, which operates a multipurpose resort complex based on its own unique tradition and culture in the United States, builds a similar one in Korea using Korea’s own culture, it would become a luxurious landmark for visitors from around the world,” Park, the president of the corporation, told reporters on Tuesday.

According to the corporation, the Mohegan Tribal Gaming Authority is planning to open a Korean office and submit a detailed plan to the Korean government by the end of June.

In February, the Korean government announced it was seeking investors to build, operate and develop about two casino resort and entertainment complexes within this year. By end of June, the applicants should submit detailed plans for investment. The government will make final decisions in December this year.

According to a report by the Ministry of Culture, Sports and Tourism, 46.7 percent of foreigners who visited foreign-only casinos in Korea were Chinese. Japanese tourists accounted for 26.1 percent.

Other Asian countries, including Singapore and the Philippines, are competing to lure Chinese tourists to their casinos.

The Korean government was passive about boosting the casino business because it doesn’t want to encourage gambling among locals.

But the Korean government has steadily eased regulations as part of efforts to boost foreign direct investment (FDI) to the country. That includes a revised law in March that cut a minimum deposit on an investment from $250 million to $200 million.

Two more casino resorts for foreigners are to be built this year. Paradise City, a project by Paradise Sega Sammy, broke ground in 2014, with an investment of 1.3 trillion won ($1.2 billion) by 2017. LOCZ Resort by LOCZ Korea, which is a consortium of China’s Lippo Group and Caesars Entertainment of the United States, was approved by the government in March.