Doosan Heavy chairman quits all of his posts

Doosan Heavy chairman quits all of his posts 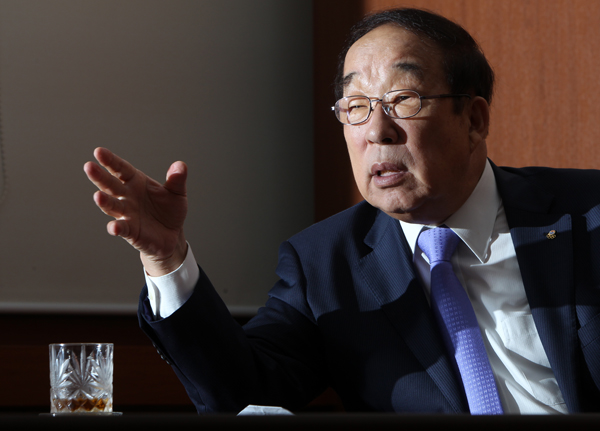 “I have seen many people sticking out their necks and waiting to be executed, so here it goes,” Park Yong-sung wrote in an email to university staff. [JoongAng Ilbo]

Park Yong-sung on Tuesday stepped down as chairman of Doosan Heavy Industries and Construction, chief director of the Chung-Ang University Foundation and honorary president of the Korean Olympic Committee after he came under fire for blackmailing university professors and administrators who opposed his restructuring plans for the school.

According to the academics, he said, “I’ll cut off your heads [which means firing them in Korean].”

“I have been trying to provide many plans to improve the overall quality of the school recently, but I caused controversy while I was working on them,” said the 74-year-old. “I offer my apology to members of the school if they were hurt. I decided to resign from the posts because I didn’t want to ruin the mood that was set recently by the members of the university to reform the school’s academic structure.”

On March 24, Park sent an email to 20 university staff, including the president and professors, saying, “I handle everything as I have the authority over personnel affairs. I have seen many people sticking out their necks and waiting to be executed, so here it goes. It will be done using the most painful method.”

According to school officials, Park didn’t like a meeting organized by professors and students who opposed his restructuring plan.

Regarding the professors and students, Park said in the email, “You should treat them like you are facing a vicious labor union, but I see many of you still treating them as colleagues.”

The university said it will hold a board of directors meeting as soon as possible to discuss follow-up measures.

Park also resigned from Doosan Heavy Industries and Construction, but he has not engaged much in the company’s business since 2008 when the company acquired the university, according to the company.

Park Ji-won started working at the company in 2001 after the company acquired Hankook Heavy Industries.

“Unlike the two vice presidents, Park [Yong-sung] isn’t a member of the company’s board of directors that makes important business decisions,” said a spokesman of Doosan. “He didn’t engage in the company’s businesses at all.”