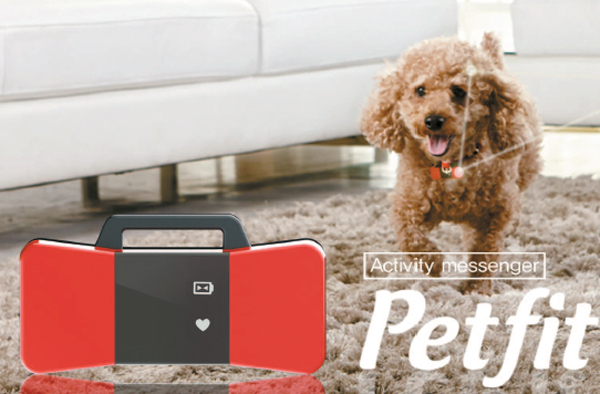 SK Telecom launched a wearable device called Petfit on Monday. The device can be placed on a pet’s collar to track movement and delivers information to a mobile app.

Long gone are the days when pet owners simply tossed some kibble in a bowl or etched their address on a collar and hoped for the best.

Animal lovers are increasingly concerned about their pets’ health or whereabouts, and a growing number of apps and digital gadgets allow owners to do everything from count their pets’ calories to track their exercise and location.

Earlier this week, SK Telecom launched a wearable gadget designed to keep dogs and cats healthy. The device, called Petfit, fastens to a collar and delivers diverse information via an accompanying mobile application.

It allows the owner to set a daily activity goal and reports the amount of time the pet spent being active, playing and sleeping. 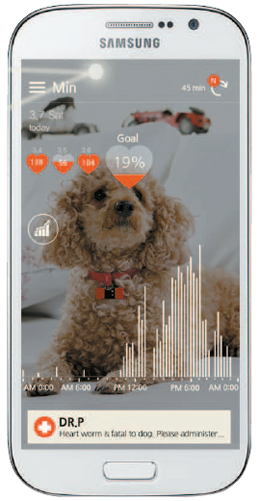 Petfit allows pet owners to check activity trends and view information on an LED screen. Provided by the company

Measuring 4 centimeters (1.6 inches) in width and 1.5 centimeters in length, the gadget is the smallest wearable pet care device in the world, according to the company.

The telecommunications provider said that the device’s tiny size will not weigh down pets.

What differentiates Petfit from other competing gadgets lies in the way it displays information. Activity trends appear on an LED screen and the owner can intuitively compare the target activity level with the actual activity based on the color of the light displayed. If a pet fulfils a daily goal, a blue light blinks. When targets are not met, yellow or red lights will alert the master depending on how far off the animal is.

Though Petfit is not equipped with tracking technology, the device will also offer exercise advice after collecting a pet’s daily movement data.

SK Telecom has high expectations for the device.

“We believe that Petfit can generate a new value and present a new opportunity for business related to data management and analysis.”

Given that nutritious diet is essential for health, the Hungry Dog smartphone app makes taking care of pets’ meals easier.

Developed by Rural Development Administration, a state-run institute, the smartphone app notifies users of the appropriate amount of calories that dogs should consume.

The Rural Development Administration believes that the app is especially relevant, as many pets today are overweight and need more exercise.

Some 30 percent of pet dogs in Korea were reported to be overweight, according to KKC, an organization that represents pet owners nationwide.

The app provides a specific diet for each breed and has updated the number of breed types over the past three years.

Emotional wellbeing also serves as a key factor affecting health. Some gadgets are designed to amuse and entertain pets while their owners are at work or away.

Ballready is a ball-launching device for cats and dogs that an owner can activate remotely. The owner can see what’s happening through an integrated camera, and once the pet deposits a ball into the launcher, the pair can play fetch from afar.

For those who tire of ball games, a new television channel designed just for dogs came out last year.

Cable TV network CJ HelloVision launched Dog TV via its digital cable TV channel Hello TV. It is the first local TV channel solely dedicated to dogs, though such programs are available in the United States and Israel.

Dog TV was designed by a group that includes animal behavioral psychologists to entertain dogs while they stay at home alone. A notable feature of the channel is that its programs take into account the colorblindness of dogs, who recognize only yellow and blue.

The number of subscribers of Dog TV has surpassed 10,000.

The TV network expects the number to keep growing with the rapid rise of single-person households with pets.