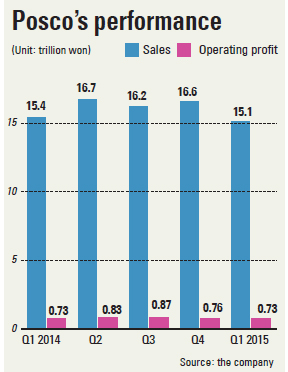 Operating profit in the first quarter for the nation’s leading steelmaker, Posco, maintained last year’s level despite the slumping industry, thanks to increased sales of high-value added products like car steel sheets.

The company also predicted the situation might not improve much in the next quarter due to a greater supply of cheap Chinese steel and more competition in Southeast Asia, one of Posco’s core markets.

The company added that sales of high-value added products increased 9 percent from the previous quarter with the company’s solution marketing strategy of offering both products but also technology support in the auto, shipbuilding, appliance and construction industries. Sales of car steel sheets, a core product, increased 6 percent from a year ago to 2.07 million tons.

“About 72 percent of the Tivloi SUV made by Ssangyong Motor is made with Posco’s high tension plates,” said Noh Min-yong, senior vice president and manager of the finance department at Posco. “Our other major clients, including Toyota, also are satisfied with our products.”

Another business that helped prop up the company’s operating profit was stabilized income from its Myanmar gas field, which is operated by its trading affiliate Daewoo International. The field became fully operational in December.

Industry analysts expected the company to improve its overall performance in the next quarter, considering that the first quarter is generally a slow time for steelmakers. But Posco said it would be difficult to expect the company to provide better numbers.

“One of the reasons is, again, the oversupply of Chinese products,” said Noh. “China has been focusing on basic industries, including construction, but as it recently started focusing on other high-value added industries; leftover product that was supposed to be used domestically is now being sold to international buyers. This situation will likely continue in the next quarter.”

The company added that some alternative products like Russian slabs also were popular in Southeast Asia.

The company said that the key to improving its sales in the future will be focusing on high-value added products that come with the solution marketing strategy.