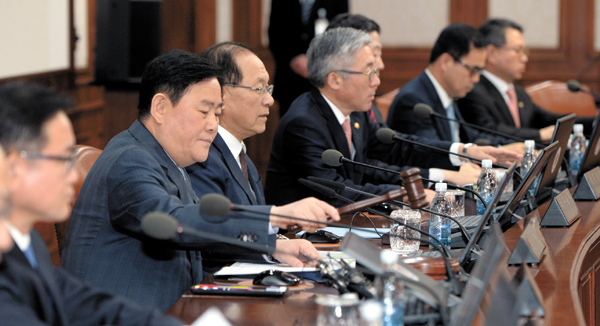 After a mere 63 days on the job, Prime Minister Lee Wan-koo expressed his intention to step down over a payoff scandal Monday night, leaving the president with the big challenge of finding a successor.

The Prime Minister’s Office said Tuesday that Lee offered his intention to resign to President Park Geun-hye on Monday night. Park is in the middle of a 12-day Latin America trip. She is expected to accept the resignation when she returns to Korea next Monday.

Expressing concerns about affairs of state during her absence, Park urged the cabinet and presidential secretariat to perform their jobs properly, according to a statement from the Blue House released in Lima, Peru.

“It is a pity and I can feel the agony of the prime minister,” Park was quoted as saying. “The prosecution should clearly shed light on everything by conducting a thorough investigation.”

The president’s remarks, an obvious acceptance of the resignation, came about five hours after Lee expressed an intention to step down.

Park named Lee, a politician who built his career in the Chungcheong region by climbing his way up from police chief in the small village of Hongseong, as prime minister in February after a series of botched nominations for the post. The former South Chungcheong governor, who also served three terms in the legislature, has been implicated in a snowballing scandal over payoffs by Sung Wan-jong, a construction tycoon-turned-politician who committed suicide earlier this month as he was being investigated for corruption.

After assuming the post on Feb. 17, 2015, Lee issued a grand statement in March to champion the Park government’s war against corruption. That prompted a probe into Sung and his company’s alleged bilking of state investments in overseas resources development projects.

Complaining that he was being made a political scapegoat, Sung dropped a series of bombshell revelations about years of money dealings with top politicians and committed suicide on April 9. Describing Lee as “greedy,” Sung said he gave 30 million won ($27,668) to Lee in 2013.

Lee vehemently denied the charge, but the prosecution and media uncovered evidence to prove otherwise.

Before leaving for Latin America last Thursday, President Park sat down with the leader of the ruling Saenuri Party, Kim Moo-sung, and said she would decide the fate of the embattled prime minister after her return. Lee, however, could not endure growing pressures as the main opposition New Politics Alliance for Democracy (NPAD) threatened to introduce a motion for his dismissal in the National Assembly this week.

The opposition NPAD welcomed Lee’s decision, calling it the “start of a fair investigation.”

“Lee made the right decision,” Moon Jae-in, NPAD chairman, said. “This is not about his personal corruption. This is a matter of the Park administration’s integrity and legitimacy. Park can only regain the public trust by demonstrating her strong will to remove all the festering problems.”

Even before her inauguration, Park struggled with prime minister nominations. So far, Park named five people to the job but only two of them, including Lee, actually survived National Assembly hearings to serve as prime minister.

After winning the December 2012 presidential election, Park nominated Kim Yong-joon as her first prime minister in January 2013. Days after, he gave up the nomination due to his sons’ alleged draft-dodging and the family’s real estate speculation.

Chung Hong-won was nominated and passed a confirmation hearing to become the first prime minister for the Park government in February 2013. Although Chung offered to step down last year in the aftermath of the Sewol ferry’s sinking and the government’s botched attempts to rescue more than 300 passengers, Park had to keep him as two nominees - Ahn Dae-hee and Moon Chang-keuk - dropped out due to scandals. Then she appointed Lee.

NPAD senior lawmaker Jung Chung-rae said Tuesday that Park must create a nonpartisan cabinet by appointing the next prime minister from outside her inner circle.

“Among Park associates, will there be anyone clean?” Jung asked in an interview with CBS radio. “I think she should receive recommendations from the opposition party or civic groups to form a nonpartisan cabinet.”

Following its successful political campaign to go after the prime minister, the NPAD also demanded the heads of more top Park administration officials.

“Resignation of the prime minister is not the end but is just a beginning,” said Rep. Woo Yoon-keun, floor leader of the NPAD.

Rep. Min Byung-doo went after President Park, calling Lee only a small branch of the big tree of corruption.

“The core of Sung’s exposures was illegal presidential campaign funds in 2007 and 2012,” Min said. “It is a grave misconception that the prime minister’s resignation will end the scandal. We just opened the first gate. We, therefore, demand that the former and current presidential chiefs of staff and Hong Moon-jong, Suh Byung-soo and Yoo Jeong-bok be investigated right away.”

Shortly before he hung himself with a necktie on a tree branch on April 9, Sung told the Kyunghyang Shinmun newspaper that he had paid off members of Park’s inner circle for years and some of the money was used to finance her 2007 primary and 2012 presidential campaign.

Saenuri lawmaker Hong Moon-jong, Busan Mayor Suh Byung-soo and Incheon Mayor Yoo were in charge of organization and finance during Park’s presidential campaign. Huh and Kim were former presidential chiefs of staff and Lee Byung-kee is the current chief of staff.

The ruling party launched a counterattack on Monday by linking the main opposition party to the scandal and questioning the integrity of the liberal Roh Moo-hyun administration, which held power from 2003 to 2008.

While Sung’s revelations were focused on Park’s inner circle, rumors are spreading in the political arena that opposition lawmakers may also have received payoffs.

Rep. Kweon Seong-dong of the ruling Saenuri Party held a press conference on Tuesday and demanded that the Roh administration’s special pardons for Sung must be investigated. Moon, chairman of the opposition NPAD, was a key member of the Roh government.

“Sung was pardoned twice during the Roh presidency, and that supports the suspicion that Sung bribed senior members of the opposition party,” Kweon said. “We need to have an investigation into the pardons. It is extremely extraordinary for someone to be pardoned twice by the same president, unless that someone has a special relationship with the administration.”

Sung was convicted of a political funding law violation in 2002 when he was serving as a special adviser to Kim Jong-pil, then head of the Chungcheong-based United Liberal Democrats. He was convicted of embezzling 1.6 billion won from his company and providing that money illegally to the party.

He was pardoned on May 13, 2005. At the time, Moon was the civil affairs presidential secretary.

His second conviction came in November 2007. He was convicted of breach of trust for lending 12 billion won of company money with no interest to the developer of the Haengdamdo project. Only one month later, on Dec. 31, 2007, Sung was pardoned. At the time, Moon was the presidential chief of staff.

Kweon said the second pardon in 2007 was particularly suspicious because it was given over the Justice Ministry’s strong opposition.

“The Blue House at the time postponed a cabinet meeting by six days to persuade the Justice Ministry,” he said. “The ministry eventually agreed under the presidential office’s pressure, but it did not make public that Sung was pardoned.”

The Saenuri lawmaker also criticized Moon’s remarks. “Moon said the special pardons are the business of the Justice Ministry and had nothing to do with the Blue House,” he said. “That is ridiculous. Pardons are the exclusive right of the president according to Article 79 of the constitution, and the Blue House’s opinion is absolute. It is a classic case of special treatment if Sung was pardoned twice by Roh.”

Justice Minister Hwang Kyo-an told the National Assembly on Monday that it was rare for a convict to receive a second presidential pardon. “I understand the people’s concerns,” he said.