Pyongyang puts stock in its beer

Pyongyang puts stock in its beer 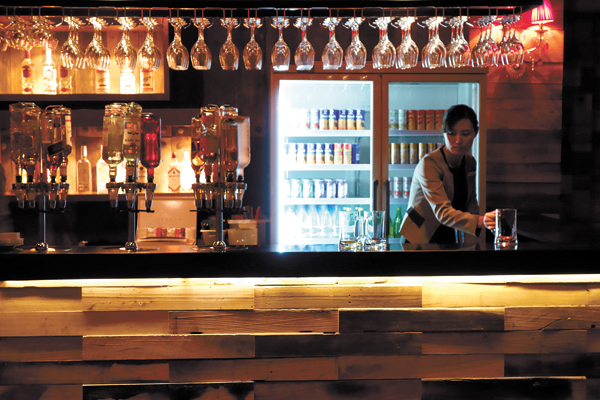 There are a few areas in which North Korea has an advantage over rival South Korea: underground resources and cheap labor are among them.

But some would argue that beer in the North is also much better than those produced here.

One defender of North Korean beer is Daniel Tudor, a former Seoul correspondent for The Economist.

In a 2012 article for the magazine, Tudor declares South Korean beer “boring” ? so much so that even North Korean beer is more appealing. “[B]rewing remains just about the only useful activity at which North Korea beats the South,” he wrote. “The North’s Taedonggang Beer, made with equipment imported from Britain, tastes surprisingly good.” 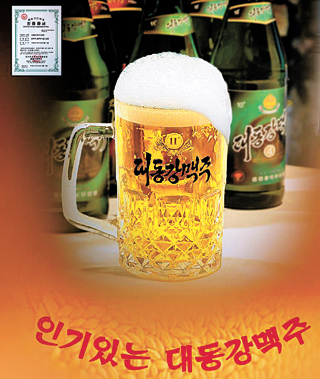 An advertisement for Taedonggang Beer in a North Korean propaganda magazine. [JoongAng Photo]

The acknowledgement came as a slap in the face to South Korean beer producers. Though it’s a rather hard point to quantify - how and why, exactly, does North Korean beer taste better? - it tasted better to him.

With the weather warming now, an increasing number of North Koreans are lining up to drink after work. One of their favorite domestic brands is Taedonggang, into which late leader Kim Jong-il put particular care, making it one of the country’s best.

Kim’s keen interest in brewing began in 2001, during a trip to the Baltika Brewery in St. Petersburg, Russia. Impressed with the facility and its products, Kim ordered his subordinates to explore ways to set up a factory like it.

From that point on, one of Kim’s major policy objectives was to make a beer brand that could sit side by side with world-class suds around the globe.

North Korea began producing Taedonggang beers in 2002, from the Taedonggang National Brewery. The brewery’s equipment was shipped from a British brewery that it purchased for 1.74 billion won ($1.58 million) in 2000, which was dissembled in order to be shipped and then reassembled upon its arrival in Pyongyang.

Taedonggang beer presumably uses underground water from the upper part of the Taedong River and rice harvested from the Jaeryong paddy field in North Hwanghae Province. The hops used for Taedonggang beer comes from Yanggang Province.

(Kim reportedly demanded that the first harvest of hops from Yanggnag be used for beer before anything else.)

The late leader’s efforts to make a world-class beer in such a closed-off country eventually bore fruit, and expatriates there soon spread the word about the brand’s quality taste.

But a major headache Pyongyang has when it comes to producing beer is its shortage of bottles. While that’s no problem for draught beer, the trouble begins when demand for bottled beer increases. Ordinary households generally consume bottled beer, while draught beer is mainly sold in local restaurants and bars.

North Korea suffers from such extreme economic hardship that many citizens glue paper to their window panes as a substitute for glass. So providing beer by the bottle becomes a tricky financial maneuver.

With that in mind, Kim ordered his people to recycle whatever glass or bottles they could find so that new ones could be manufactured.

Young North Korean leader Kim Jong-un, who took power following his father’s death in December 2011, has not visited the brewery yet. However, it is widely said that Kim is a big fan of French red wine due to his years studying abroad in Switzerland.

While South Koreans are notorious for the frequency of their drinking, North Korean men aren’t that much different. And many North Korean women don’t shy away from it either these days - a trend reflective of the increasing role women have assumed in supporting the household economy.

In the past, those in the South had the luxury of enjoying Taedonggang beer without having to visit the North.

However, the May 24 sanctions imposed in retaliation for North Korea’s sinking of the ROK Cheonan warship in March 2010 put all inter-Korean economic cooperation to a halt except for the Kaesong Industrial Complex.

As a result, the idea of drinking Pyongyang-crafted beer is something of a memory. To access it now, one must go to places like China or visit the inter-Korean industrial complex in Kaesong.