Aide to exec who killed himself is interrogated

Aide to exec who killed himself is interrogated 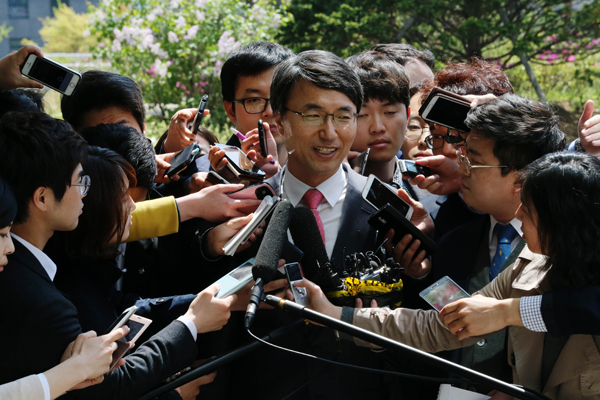 The investigation of a list of politicians found in the pocket of a businessman-turned-politician who hanged himself picked up steam as one of the businessman’s key aides was summoned for questioning Tuesday, though he denied his involvement in paying off politicians or knowing of any records kept.

Park Jun-ho, a former executive of Keangnam Enterprises, appeared Tuesday at the Seoul High Prosecutors’ Office in southern Seoul. Park, who was once in charge of the construction company’s public relations, is considered one of the closest aides to former chairman Sung Wan-jong, who hanged himself by a necktie from a tree branch on Mount Bukhan April 9.

Sung had a note in his pocket with the names of eight politicians close to President Park Geun-hye, including Prime Minister Lee Wan-koo, who offered his resignation Tuesday over to the scandal, and former Presidential Chief of Staff Kim Ki-choon. In an interview with the Kyunghyang Shinmun just hours before his suicide, Sung specified how much he gave to some of the individuals in payoffs.

“I had to discuss issues with my lawyers,” Park said. “I thought it would be better to appoint a lawyer for the prosecution’s questioning, and I will fully cooperate with the investigation.”

He talked with reporters for about 10 minutes in front of the Seoul High Prosecutors’ Office.

“I can’t say anything about Sung’s bribery and I have never seen him offering bribes,” Park said. Asked if he knew about any records of payoffs at Keangnam Enterprises or attempts to destroy them, he answered, “Not that I know of.”

Park said none of the eight people on the list in Sung’s pocket tried to influence him before he appeared for questioning.

Park is the first of Sung’s aides to be questioned because he is thought to be well-versed about Sung’s activities outside the company and meetings with people in political or economic circles.

Also, Park attended a meeting with Sung and his chief secretary Lee Yong-gi a day before Sung’s death on April 9. He also accompanied Sung on a visit to the former vice president of Keangnam Enterprises, Yun Seung-mo, at a hospital on April 6.

When asked about his last meeting with Sung and the conversation with Yun, Park said he would tell prosecutors about them. He said he did not remember anything out of the ordinary in the conversations.

Sung was supposed to attend a hearing for a pre-trial detention warrant on April 9 over his possible bilking of government investments in the resources diplomacy initiative of the Lee Myung-bak government. Sung disappeared that morning and was later found on Mount Bukhan, northern Seoul, hanging from a tree branch.

Sung was thought to have discussed the hearing in the meeting with Park and his secretary Lee.

Park also has a political background. He worked as secretary for lawmaker Choo Mi-ae of the main opposition New Politics Alliance for Democracy for about a year from 1997. He is also the president of the Onyang Hot Spring Hotel, an affiliate of Keangnam Enterprises that is suspected to have created slush funds for Sung.

Meanwhile, prosecutors sent investigators on Tuesday to raid Park’s residence in Goyang, Gyeonggi, and the headquarters of Keangnam Enterprises in eastern Seoul in order to confiscate documents and CCTV footage.

It was the third time the prosecution raided the headquarters. Prosecutors explained that Tuesday’s raid was to find out if the company tried to destroy evidence by turning off security cameras or erasing CCTV footage.