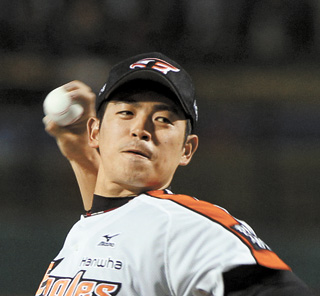 Hanwha Eagles’ fans have been waiting all season for pitcher Lee Tae-yang to take the mound, but it looks like they’ll be left hanging for another year.

The 24-year-old decided to have Tommy John surgery to fix a damaged ulnar collateral ligament on his right elbow. Recovery is expected to take about a year, which means his season is over.

Lee is scheduled to have the surgery April 28 in Yokohama, Japan.

“We needed to make a quick decision about his future treatment,” Eagles manager Kim Sung-keun said. “Lee said that he wanted to have surgery quickly, so I accepted his choice.”

Lee appeared in a minor league game against the LG Twins in Icheon last Wednesday. But after throwing 28 pitches in two innings, he stepped off the mound after reporting pain in his elbow. He was later examined at the hospital, where it was recommended he receive surgery.

Lee joined the Daejeon-based club in 2010 was expected to become a key part of the Eagles’ starting lineup. Last year, he went 7-10 with a 5.29 ERA in 30 games and was the only the Eagles player in the 2014 Incheon Asian Games, when Korea claimed the gold medal.

Although his performance wasn’t impressive compared to other top pitchers in the league, Lee was considered a promising player for this season. Eagles manager Kim was disappointed when he heard the news about the Yeosu-born pitcher, whose absence affects his starting rotation.

Q. When did you know you needed to get surgery?

A. When I went to the hospital, I noticed my condition was poor and that my arm hadn’t been good for some time. I said to myself, “If you have good days, you’re bound to have some bad days as well.”

How is your arm condition right now?

There is a problem with the ligament, but I don’t know exactly how damaged it is. My club and I both agreed it will be better to have surgery rather than just going through rehabilitation.

Manager Kim said that the season was over for you.

Rehabilitation for Tommy John surgery takes about a year, and as the manager said, I think it will be difficult for me to play this year.

Have you ever had surgery before?

No. I haven’t had to go under the knife since I started playing baseball. This is also the first time that I’ve had any kind of serious injury.

What did your parents say?

They told me to have surgery and recover. Since I’m young, they said that it won’t take a long time for me to get better, but they are worrying a lot about me. I feel really badly about that.

Some people are saying your injury is related to the Eagles’ hard training this season. What do you think?

I don’t think my injury came from the increased amount of training, and I definitely don’t think that it’s the manager’s fault. ... I just think the time came and I got hurt.

Do you have anything to say to Eagles fans?

I will return as fast as I can after having surgery and going through rehabilitation. I’m really sorry that I already need surgery, before even starting the season. I will return next year in healthy condition.