Throwing paper plans has long been considered a childhood pastime, but in recent years, the hobby has evolved into a full-blown sport.

There’s even an international championship: the Redbull Paper Wings World Finals. Held every three years, the tournament is entering its fourth edition and will take place in Salzburg, Austria, on May 9.

More than 37,000 participants from 83 countries competed in 2012. This year, organizers expect that number will rise even higher.

But the first step to competing in the international competition is making it onto a national team.

In Seoul, some 1,600 people originally bid for a spot on the national squad. After eight qualifying rounds, 58 competed in the final selection trial at the SK Olympic Handball Gymnasium, on April 11. 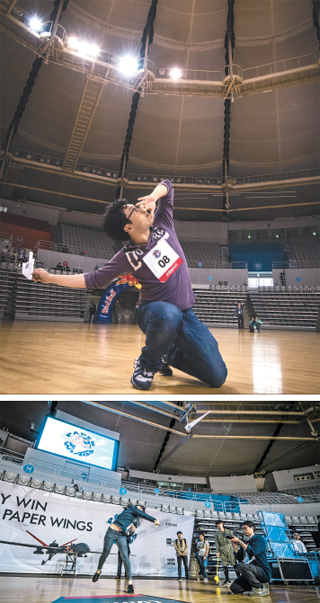 Competitor performs during the Korean qualifiers for the 2015 Red Bull Paper Wings World Finals at SK Olympic Handball Gymansium in Seoul on April 11.

For the distance event, most of the paper planes are shaped like darts, with a sharp head and small wings, to minimize air resistance. Competitors in this category usually launch their planes as though they are throwing a javelin, maintaining an upward angle of about 20 to 30 degrees to get more lift.

The Guinness World Record for the farthest flight by a paper aircraft is 69.14 meters (226 feet and 10 inches), achieved by Joe Ayoob and aircraft designer John M.Collins in 2012.

For the longest flying time category, the planes are usually flat, with big wings. Participants usually throw their aircraft at an upward angle of 70 to 80 degrees.

The Guinness World Record for this category is 27.9 seconds set by Takuo Toda, head of the Japan Origami Airplane Association, in 2009.

The aerobatics category evaluates plane construction, flight performance and creativity. For this category, there are no restrictions on to paper type, size, construction technique and supporting materials. Each participant has one minute to perform in front of a three-member jury, where each member judges a different criterion and can award between one and 10 points.

There is no prize money awarded at the qualifiers, but the winners all earned a chance to participate in the championship in Austria and the opportunity to skydive in the Alps.

Lee is the local defending champion in flying time category, winning to Korea Cup contest in 2013. He even took temporary leave of absence from his university to spend more time practicing, throwing planes until late in the night. The journalism & mass communication major student named his paper plane “Bird Man” and trains his shoulders to better his throwing.

“I’m from rural town in Sangju, North Gyeongsang, and grew up making paper planes from notebook paper,” he said.

“I was really interested in aerodynamics as a kid”

Competitor performs during the Korean qualifiers for the 2015 Red Bull Paper Wings World Finals at SK Olympic Handball Gymansium in Seoul on April 11.

While some might question the legitimacy of throwing paper planes as a sport, Lee points out that the traditional understanding of sports is broadening.

“Paper plane competitions have been featured on ESPN, as well as the Discovery Channel,” he says. “Just like there is a world stone skipping championship in Scotland, paper plane throwing is a sport.”

Lee also says that paper plane throwing is also more accessible than other sports, as the A4-sized paper from which paper planes are commonly made is readily available.

Kim Jeong-hyo, a sport philosopher who teaches at Seoul National University, also agrees that throwing paper planes is more than a hobby.

“In order to be recognized as a sport, there needs to be certain format of exercise and like golf swings and dribbles in football, and differences in physique should make an impact on competition,” Kim said.

According to Kim, throwing paper planes meets this standard.

Lee is now aiming to become a world champion at the upcoming Red Bull competition. His personal best is 18 seconds, which far exceeds Lebanon’s Elie Chemaly, who won with the longest airtime of 10.68 seconds in 2012.

“I really want finish first place and want to see Korean flag fluttering in the sky of Austria,” he said.

“I also intend to reveal the manufacturing process behind my ‘Bird Man.’”