For low-cost mortgages, devil’s in the debt details

For low-cost mortgages, devil’s in the debt details 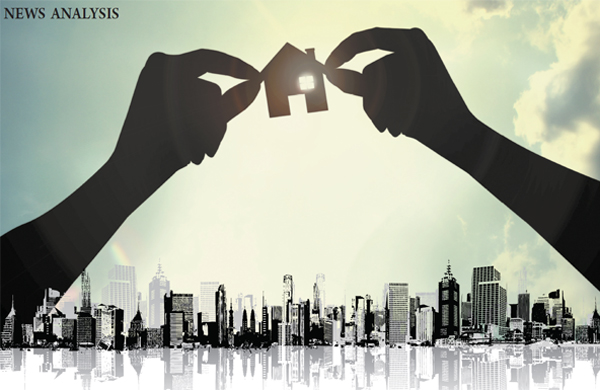 Park Hae-jin, 29, who tied the knot in January, loved shopping when she was single. Fortunately, she is not one of the young Koreans who give up on marriage because they are concerned about affording a place to live. She moved into an 85-square-meter (915-square-foot) apartment in Jamsil, southern Seoul, on a two-year lease contract known as jeonse in Korean, with money from her in-laws and a 150 million won ($139,000) bank loan. The jeonse price is 550 million won.

“I feel lucky I could get financial help, but my shopping life has just ended, which makes me miserable,” says Park. “I’m sure jeonse prices in this area will surge next year, and I’m pinching pennies for the first time in my life to pay interest to my bank and extend the jeonse contract in two years.”

She has to shell out about 800,000 won per month in principal and interest for 20 years to repay her bank loan. Fortunately, her husband works at the country’s largest conglomerate and is well-paid.

Cutting back on consumption has become common, despite government efforts to boost Asia’s fourth-largest economy that is experiencing some of its lowest growth ever.

Sadly, Park’s case is a positive for the country, compared to other people with similar housing costs who would never think of shopping.

The 45-year-old owner of a tiny diner in Seodaemun District in central Seoul, surnamed Lee, says her average monthly income is less than 2 million won and sometimes half of that.

Lee has a 100 million won loan from the MG Community Credit Cooperative, a financial institution for people with weak credit, to afford her jeonse house priced at 180 million won.

“I have never thought of going shopping my whole life,” she says, “and I feel things are getting tougher these days as I see my earnings stay the same while housing prices keep rising.”

It is no longer surprising to hear monthly news reports that Korea’s household debt has hit a new high. It was 1,089 trillion won at the end of 2014.

Although a number of economic and financial analysts have voiced concern about rising household debt, policy makers and researchers at state-run institutions have countered that the level is not high enough to threaten the country’s financial system. Some research institutions that publish reports commissioned by government agencies even say the debt level is manageable, since a significant portion is owed by middle-class households with the financial capability to pay it back. 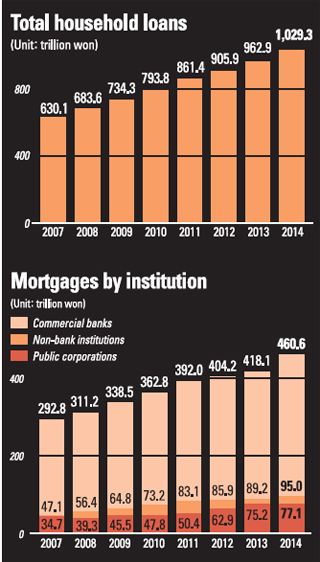 Based on such conclusions, the government has made it a top priority to increase growth and placed the household debt issue on the back burner. Yet multinational economic organizations such as the International Monetary Fund and Organization for Economic Cooperation and Development have warned Korea about its debt problem.

When Yim Jong-yong, chairman of the Financial Services Commission (FSC), the country’s top financial regulator, took office, there were high expectations for his first policy pronouncement related to household debt. Many people expected some kind of sophisticated policies to contain debt by giving people financial solutions they could really use. But such high expectations turned out to be a disappointment, as the financial regulator came up with a plan that was both piecemeal and temporary.

Anshim Jeonhwan Daechul, the refinancing program to convert high-interest floating rate mortgages to lower fixed rate government-backed loans, swept through banks across the nation in late March. A total of 345,000 applications were made to the program for 33.9 trillion won worth of mortgages at fixed interest rates between 2.55 and 2.6 percent during the last two weeks of the month.

People living in apartments valued at up to 900 million won with mortgages of 500 million won or less were eligible for the government program, allowing them to get a better deal. The program was intended to protect homeowners - and the economy - from interest rate increases in the future.

Such explosive demand for the refinancing program was a clear sign that many people are burdened with high debt and struggling to make ends meet while paying interest and principal on their home loans.

Ironically, the huge popularity of the government-backed mortgages exposed defects of the program itself, as well as the serious vicious-cycle problems inherent in the structure of household debt.

First of all, the government program did not adequately take into account everyone who needs refinancing as it was designed for households with relatively good financial capabilities, while marginalizing low-income households.

Secondly, the government is either underestimating or overlooking the severity of the debt problem among low-income households and its potential threat to the national economy. 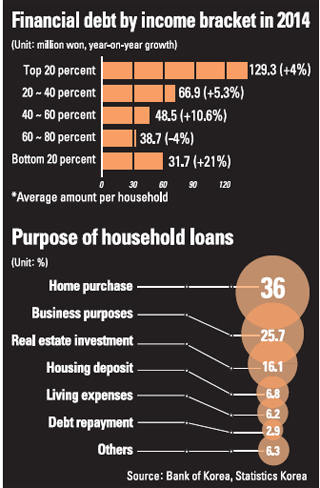 According to Cho, people with sound finances can borrow money to buy a house to live in or as an investment. It is relatively healthier debt, but if housing prices fall, their debt becomes a problem.

The other type of debt is by low-income households that in many cases divert money from repaying mortgages to cover daily living or business expenses, says Cho. Such cases represent a strong chance of defaulting on their loans.

“Who borrowed the loans, for what purpose and how much such debt rose should be studied on a micro perspective,” he says. “The latest government program raises questions about its effectiveness because it didn’t take into account the rapid growth of the total debt at low-income households.”

FSC Chairman Yim did pledge to look into the structure of the nation’s household debt to provide more practical policy measures to improve the financial health of each consumer group.

Debt growth in the low-income bracket also is more likely to be used for daily living expenses than housing, Cho says. The Statistics Korea survey showed about 18 percent of respondents in the bottom 20 percent said they borrowed to pay living expenses.

The ability of low-income families to repay debt has been eroding for the past four years, the survey showed. In 2014, the ratio of debt to disposable income was 120.7 percent, meaning the level of debt was 1.2 their annual disposable income. The ratio was the highest of all income brackets. The debt repayment-to-disposable income ratio was 27.2 percent for the lowest income group, meaning 272,000 won of each 1 million won in income went to repay loans.

Even though household debt continues to grow, a more serious issue is that the debt growth reduces spending that is sorely needed to stimulate housing transactions, retail sales and, ultimately, the overall economy.

Until 2009, similar debt growth had led to significant increases in housing purchases and consumption, says Jeon Yong-sik of Korea Insurance Research Institute. After the government that year eased household debt regulations, debt rose 7.4 percent and consumption jumped 10.9 percent. But last year, even after the LTV and DTI ratios were lowered, private consumption inched up only 1.4 percent in the final quarter compared to a year earlier.

Jeon says the benefits of household debt for the real economy have declined, while the risks have risen.

Critics say the government should have been more careful about lowering the DTI ratio.

Last year’s DTI and LTV cuts lacked consistency with the government’s macroeconomic policies to boost the real economy, and turned out to only accelerate debt growth, says Jeon of the Korea Insurance Research Institute.

Financial and economic analysts advise the government to take a more sophisticated approach to studying the structure of the country’s household debt, particularly that of low-income households.

Along with curbing the total amount of debt, specific measures for different income brackets should be used, says Cho. For example, government measures should focus on who borrowed money for what purpose.

The government also should employ measures to help raise incomes for poor households, while managing the total amount of debt, experts say.

“I agree with the government’s stance that the current household debt increase won’t pose a threat to the financial system,” says Lim Il-seop, head of the financial research division at Woori Finance Research Institute. “But the latest increase in debt for low-income households for living expenses is caused by high unemployment and a high proportion of self-employed businesses.”

Today’s rising household debt at a time of sluggish GDP growth suggests the financial health of economic players is deteriorating, he says.