Some height limits are announced for Yongsan

Some height limits are announced for Yongsan 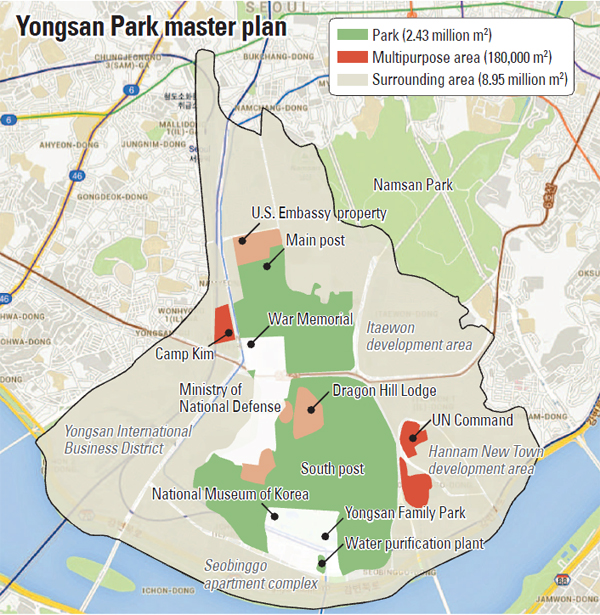 The government approved the first overall plan for redevelopment of a part of the Yongsan military base, putting a height limit on buildings of 70 meters (229 feet), or about 21 floors.

The Ministry of Land, Infrastructure and Transport announced Wednesday a master plan for developing land that is home to the United Nations Command at Yongsan Garrison for residential, commercial and retail use.

The ministry plans to turn the Yongsan Garrison into a national park for the public once the U.S. military relocates out of Seoul. This is its first redevelopment plan for part of that project.

According to a Land Ministry report released Wednesday, the 51,753 square-meter (5.17 hectare) lot in Itaewon-dong will be used for multipurpose facilities, including apartment buildings, office towers and shops.

Still, 14 percent of the lot must be used for public purposes such as a park or roads, the ministry said.

The 70-meter limit for buildings is intended to keep them from blocking the view of Mount Namsan.

Korea Land and Housing Corporation, a state-run builder, will be in charge of the development, the ministry said.

The plan is part of the government’s so-called Yongsan Park development project, in line with the U.S. forces of Korea’s relocation to Pyeongtaek, Gyeonggi, south of the capital, by 2016.

Three areas including the home of the UN Command will be developed for commercial use, and through that the government will raise money to pay its share of the U.S. military relocation, about 3.4 trillion won ($3.1 billion), the ministry said.

The two other areas redeveloped for commercial purposes will be Camp Kim, a military facility adjacent to Yongsan Garrison, and the current land that houses the U.S. Transportation Command.

“We are going to approve a detailed plan for development of the land occupied by the UN Command within this year so the builder could break ground as soon as possible,” a Land Ministry official said by phone.

Since a law dictating that the Yongsan Garrison be redeveloped as a public park was enacted in 2007, the central government and the Seoul city government have reached agreement on a big picture for the plan: developing more than 90 percent of the area, about 2.43 million square meters (600.5 acres) in total, for a public park.

But they differed on plans for the land occupied by the UN Command, Camp Kim and the U.S. Transportation Command. While the central government said they should be used for high-rise buildings for residential or commercial use, the Seoul city government wanted to protect views of Mount Namsan for people living south of the Han River.

At the end of 2014, both sides reached consensus on the development of the three controversial areas, accepting part of each’s demand: The central government accepted the Seoul city government’s call for a 70-meter height restriction in the two areas (the UNC and Transportation Command), while the Seoul government also allowed development of Camp Kim for high-rise buildings.

The land occupied by Camp Kim will have a floor area ratio of more than 800 percent for each building. A floor area ratio is the ratio of a building’s total area to the size of the land it is built on. There will be no height limit for Camp Kim.

Concerns are still lingering, however, over the possibility that the government won’t be able to raise the money it needs for its share of the costs of relocating the U.S. military. The height restrictions may cut how much it can earn from the redevelopment.