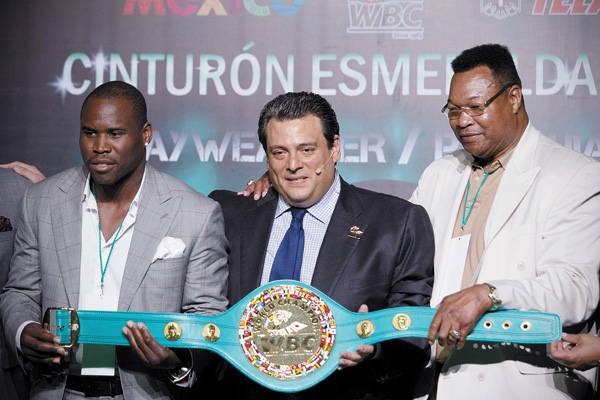 From left: Canadian boxer Stevenson Adonis , President of the World Boxing Council Mauricio Sulaiman, and former U.S. boxer Larry Holmes hold the emerald belt during its presentation in Mexico City on April 21, 2015. The emerald belt will be presented to the winner of the fight between Floyd Mayweather Jr. and Manny Pacquiao, which will take place on Saturday, May 2. [AP/NEWSIS]

LAS VEGAS - Floyd Mayweather Jr. got his license to fight Manny Pacquiao, along with a question about domestic abuse. Veteran referee Kenny Bayless got a spot in boxing’s richest fight ever.

Meanwhile, all anyone looking for a ticket to the Mayweather-Pacquiao fight got on Tuesday was the runaround.

On the day Mayweather got his license and Bayless was picked by Nevada boxing commissioners to be the third man in the ring, there was still no announcement of ticket sales for a fight now less than two weeks away. Though many of the tickets have long been spoken for, the MGM Grand hotel has repeatedly promised a public sale of at least a token amount of seats for the May 2 fight.

Promoter Bob Arum charged that the tickets are being held up because the MGM and Mayweather’s camp are trying to get both more tickets and better seats from the allotment given to Pacquiao.

“What’s happening now is a scandal,’’ said Arum, who promotes Pacquiao. “Customers of various hotels are cancelling their reservations, including big high rollers. Nobody could tell them if they have tickets.’’

The MGM has been tight-lipped about the tickets, which originally were supposed to go on sale weeks ago. A hotel spokesman said Tuesday he was trying to find out more information about them, but otherwise had no comment.

Mayweather confidant Leonard Ellerbe also did not return calls, and his manager, Al Haymon, doesn’t talk to the media. Arum, though, had plenty to say, charging that MGM executives were conspiring with Mayweather’s camp to take the best seats despite an agreement calling for the Mayweather and Pacquiao camps to get equal shares of tickets after the MGM takes care of its customers.

The tickets represent millions of dollars for both sides, especially in the secondary market where they are expected to sell between two and three times the face value of $1,500 and up.

“They’re embarrassing themselves,’’ Arum said of the MGM officials, who he has feuded with previously. “They’re trying to get more tickets to be kicked back to Al Haymon to sell on the secondary market but they can’t sell any tickets until we have a signed agreement. They can’t use Manny’s name without that agreement.’’

While the ticket dispute dragged on, parts of the fight moved forward. The Nevada Athletic Commission met to approve Bayless as the referee and Dave Moretti, Glenn Feldman and Burt Clements as judges.

Bayless won’t have to introduce himself to either fighter, having worked five of Mayweather’s fights and seven of Pacquiao’s bouts. He is widely considered the best referee in Nevada, and is often used for big name fights.

Bennett said he consulted with representatives of both fighters before making his recommendation on both the referee and the judges. Mayweather’s camp had no problems with either, and Arum said Pacquiao’s side is also happy with the selection.

The judges are also veterans of big fights, especially Moretti who has judged five Pacquiao fights and the last three Mayweather fights. They will be paid $20,000 each, while Bayless will get $25,000.

Boxing commissioners also gave Mayweather a special license for being a fighter over 35, the same license Pacquiao got last month. Mayweather called in to the meeting to answer questions, and commissioner Pat Lundvall asked him if he had completed all his obligations in connection with a 2012 domestic violence plea that sent him to jail for two months.

“I took care of it,’’ Mayweather said.