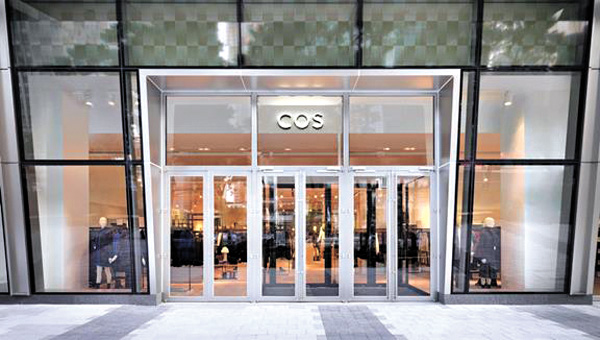 Korea’s first Cos store in Jamsil at the Lotte World Mall. Provided by Cos

Contemporary brands, a mid-range segment considered a step down from luxury designer lines, are seeing solid growth in sales amid lackluster performances from other apparel groups.

Sales of contemporary clothing rose 9.8 percent in 2014 at Shinsegae compared with a mere 0.5 percent growth in overall apparel. At Lotte Department Store, contemporary fashion brands saw a 12.2 percent boost in annual sales during the same period compared with a 6.4 percent rise in the broader apparel category.

In this sector, brands such as Maje and Theory mostly appeal to financially independent, fashion-conscious female consumers in their 20s to 50s.

“Buying a luxury brand costs a lot more and can be financially burdensome for customers,” a Shinsegae spokesman said.

“But with contemporary brands like Theory, you get to enjoy a very trendy and well-designed item at a more reasonable price. It is still a bit costly, but not as costly as your typical luxury designers,” he added.

Economic factors aside, the wider appeal these brands have among various age groups with different style preferences have also driven their sales.

A linen jacket by Maje would be as likely to entice a stylish professional in her 20s as much as it would her trim and fashionable mother in her 50s.

“We often have a stylish customer in their 50s come to our store and buy clean-cut jackets or pants for both herself and her daughter,” said a store manager at Maje in Shinsegae’s main branch in central Seoul.

Contemporary brands are chic in a more understated way as they do not scream high fashion.

“We call this growing preference for contemporary designer looks ‘normcore,’ as in normal and core. Customers do not want to stand out but still want to have an edgy and stylish look,” said a Lotte spokeswoman.

The company said it is currently working to bring in more contemporary designers from overseas.

“We are particularly interested in new, up-and-coming contemporary designers that are not yet very well-known in Korea,” the spokeswoman said.

The popularity of contemporary looks has prompted mass-market brands to create wildly successful seasonal collaborations with designers, such as Alexander Wang and Isabel Marant’s collections for H&M.

H&M, in fact, went on to set up a brand that offers simple, modern looks for less in 2006, two years after its first designer collaboration with Karl Lagerfeld.

Cos is H&M’s upmarket brand, positioned at a slightly higher price range than the fast-fashion house. It currently operates 116 stores in 25 countries. Cos has two stores in Korea: one in Jamsil at the newly opened Lotte World Mall and another at Times Square mall in Yeongdeungpo, southwestern Seoul.

On any weekend day, the Cos Jamsil store is packed with both male and female shoppers of various ages. And they are what you would call a fashionable crowd.

A long line of shoppers can be seen outside the fitting rooms, waiting patiently with piles of clothing draped over their arms.

“I like Cos because their design is modern and chic,” said Kim Jee-eun, a 38-year old housewife dressed in a long-sleeve charcoal dress with a well-worn Tod’s tote over her shoulder.

“And the price is reasonable, too. You would have to pay four or five times the prices seen here at [department store] brands with similar fair,” she added.

A simple black jacket here, which has a clean and modern silhouette reminiscent of the styles of Jil Sander, a higher-end fashion house, costs around 200,000 won ($185).

Cos declined to give details on how its Korean stores were faring but a spokeswoman for the brand said its “upper management is very happy with the latest results” and is mulling opening more stores in Korea.