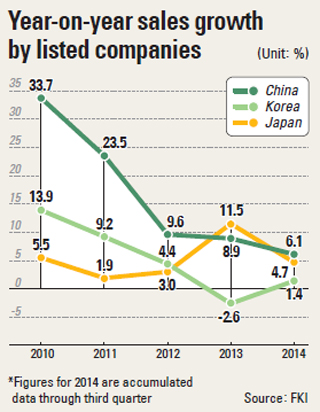 Korean companies have fallen behind Japanese and Chinese rivals in growth rate and profitability since the 2008 financial crisis, a report released by the Federation of Korean Industries (FKI) said Wednesday.

The report analyzed a total of 5,598 listed companies in the three nations from 2007 to last year. It showed that while the sales of Japanese companies increased only about an average of 3 percent per year in 2011 and 2012, they spiked 11.5 percent in 2013 and jumped another 4.7 percent last year. The upswing was due to improved price competitiveness, thanks to the depreciating yen driven down by the Abe administration’s efforts to boost the economy.

Korean companies had to deal with increased price competition in the global market as a result, and were also impacted by the slowing Chinese economy. The sales of Korean companies dropped by 2.6 percent in 2013 from a year earlier and only rose 1.4 percent last year. But if the data excludes financial businesses, the sales figure for last year actually dropped by 1.6 percent.

The sales of Chinese companies increased by 20 percent or more per year until 2011, but the figure dropped to a single digit in 2012 and has held at a similar level due to the slumping global economy.

The Chinese government’s recent efforts to develop the higher-end industries that Korea traditionally exports, such as cars and IT, have also impacted the sales of Korean companies.

The data on profitability told a similar story.

The report said that the operating profits of Japanese companies have been improving under the weakening yen and falling international oil prices, which has helped them by lowering the costs of Japanese goods and boosting profits from currency exchange.

The report added that Korean companies are profiting less because of their struggles with exporting the country’s major industries.

As with sales, the Chinese economy’s slowdown has also played a major role in Korean companies’ declining profitability.

“The Korean government needs to quickly ratify the FTA with China within the year and also needs to help local companies expand their businesses in other Asian regions, including Southeast Asia,” said Eom Chi-sung, deputy secretary general & head of international affairs division of FKI. “It also needs to attract more foreign investment into the country.”