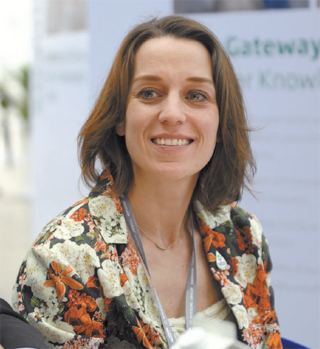 In these slow economic times, “green” investments often go by the wayside. Governments fear that environmentally friendly rules will put the brakes on what growth there is, because of the perceived added expense of going green.

But Kirsten Brosbol, Denmark’s minister of environment, says it is possible to have both environmental protection and economic growth if there is strong leadership in the central government that gives priority to environmental policies coupled with a private sector that sees profits in going green.

“Our economic growth has continued while [Danish industry] is shrinking its environmental footprint,” she told a reporter last week at the Danish pavilion at the 7th World Water Forum in Daegu. “Shifting the paradigm of industries has been a competitive advantage to our private sector businesses and to our country.

“Exports of green technologies and related products now account for more than 10 percent of Denmark’s total exports,” she added, and green technology has become an important boost to the value added. Jobs in green sectors are also increasing, she said.

The minister described Denmark’s fisheries and agricultural-based economy and its appreciation of the value of water. The following are edited excerpts of the interview.

A. Yes, that’s true. Denmark was one of the first countries to start environmental protection movements. I think the movements began earlier than in other countries because of our serious problems back in the 1970s.

We don’t have big rivers in Denmark, and coastal fisheries have always been important. We began to see dead fish in our streams, and ocean fisherman began seeing environmental problems. It was reality, and made us decide politically to do something about pollution.

In 1971, Denmark became the world’s first country with a separate ministry responsible just for environmental protection. From then on, there was a strong political interest in addressing those problems. I think a strong civil society has also been a driving force that made politicians deliver on their green promises.

Along with those joint efforts, strong regulatory frameworks and incentives for private companies to lessen their environmental footprint were crucial contributors to the changes.

It must not have been easy for the government to convince the private sector to accept sustainable development and conservation. That’s often seen as anti-business. What do you think?

We had those debates as well. But many Danish businesses turned this into a competitive advantage for them. Now their green profile is a significant part of their competitive edge that helps sell their products worldwide. I think Denmark has made a strong case over the past decades that it is possible to decouple economic growth and the industry’s environmental footprint.

Exports of green technologies and related products now account for more than 10 percent of Denmark’s total exports. So, green technology has really become an important part of what we’ve done globally and is creating value. It’s the same in jobs. Many Danish people are working in green sectors, creating jobs and income for our people.

I would emphasize again the importance of public debate, companies taking a responsible attitude toward their footprint, and pressure not just on us politicians but also on industry to prove that they’re doing something environmental. Many companies are working on green strategies as part of their corporate social responsibility initiatives.

Of course, there is still a ways to go to meet our environmental goals. As I said, we still have to ensure that our streams and lakes are clean and healthy, and because agriculture uses 60 percent of our land, we always have had a dilemma in turning that into a competitive advantage.

In terms of water issues, Denmark has a large population that drinks tap water. In Korea, the rate is very low, less than 10 percent. What was Denmark’s secret to success in gaining public trust in water quality?

In 1853 in Copenhagen, we had an outbreak of cholera, which killed large numbers of our people. The disease is waterborne. We discovered very early that water can bring life but also death. At the time, we started pumping clean groundwater instead of drinking surface water, and since then we have priced water at its value and protected it.

For many years, most Danish people have taken pride in the fact that we are able to drink our groundwater without purifying it, pulling out directly from the ground and sending it to our kitchens. Such pride makes us feel more protective about our water.

The protection of groundwater has been an extremely high priority across the political spectrum. No matter what color the government is, this is something people expect from their government.

In particular, the high price of water is an important factor in protecting our resources. We still have enough resources underground, and all Danish people can drink untreated underground water from the tap. Water pricing can be challenging in some countries because of concerns about equal access to water, but I think it’s possible to combine access and responsible prices.

There are many different ways to organize this effort. Denmark is working on water pricing with some of our partner countries. The European Union and China Water Platform is an example in which the EU and China are working together to look at pricing to address China’s water problems.

You said Denmark has given water a high political priority. How should developing countries, where economic growth is key, address water issues?

Opposition to environmental regulations and arguments about growth are often mentioned as reasons for deregulation. I think instead we should look at energy efficiency. Efficient use of energy is both environmentally sound and a competitive edge for an industry.

In Denmark, we have technologies to extract valuable resources from wastewater. Phosphorus, for instance, is extracted and can be reused. It is a limited resource globally, and is vital in producing food. Companies can produce energy from waste, becoming net producers, not net users, of energy. This is very relevant in most parts of the world.

What other things should be done to address environmental issues?

We can’t keep doing what we’re doing now. The pressure on all natural resources, not just on water, is too high. By last August, the world had used all materials and resources that the Earth can replenish in a single year. Since then, we’ve been using natural resources that our children and grandchildren should be using. Raising awareness about that is very important. Looking at how we can make more with less - consuming fewer raw materials and water, reusing them and creating a circular economy - is extremely important.

Denmark has many eco-friendly and water-related technologies and policy and regulation platforms that back up conservation initiatives. What will be the next step for Denmark?

When looking at challenges regarding water, we still have problems in our streams, coastal waters and lakes. But I think the emerging new challenge is to figure out how to adapt to climate change.

We’ve experienced more frequent storms, heavy rainfall and flooding in cities and coastal areas. Because Denmark is a low-lying island, our coastal areas will be severely hit by a rise in the sea level.

The problem can’t be solved overnight, but it’s something that we’re aware of. After discussing the UN Sustainable Development Goals in September, we’re visiting Paris to talk about climate change adaptation. Countries will gather to share goals to prevent climate change but also to adapt to the environment we will have post-climate change.

On a national level, Denmark is also developing our own plans regarding adaptation, new ways of financing it and so on. For example, if a Danish resident pays a water fee, some portion of the money goes to help finance climate change adaptation in each municipality.

What kind of international cooperative projects is Denmark doing with partner countries?

We have many partners, including Korea, working together on different levels and on many environmental issues. Staff members of Danish water organizations have been working with K-water on new technologies and exchanging technological ideas.

We also work with five partner countries, China, Vietnam, South Africa, Kenya and Turkey, in a green growth council. We want to improve sectoral cooperation in those countries, but we are also looking more widely at entire regions to see how we can share each other’s special strengths.