Abe refuses to repeat past apologies in Jakarta

Abe refuses to repeat past apologies in Jakarta 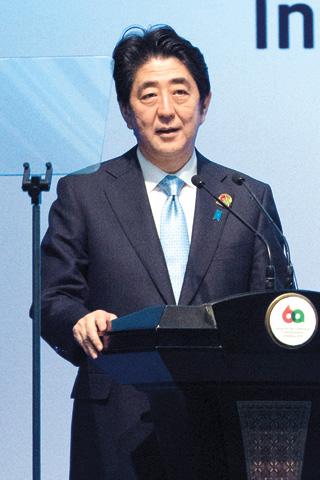 Japanese Prime Minister Shinzo Abe stopped short of expressing a “heartfelt apology” to Japan’s victims of colonial rule and aggression before and during World War II in a closely watched speech at the Bandung Conference in Jakarta on Wednesday.

Instead, in a speech at the two-day leaders’ summit of the Asian-African Conference, Abe expressed “feelings of deep remorse over the past war,” without actually employing the wording of previous Japanese figures.

While Abe has declared he will “uphold” milestone apologies from 1993 and 1995 in concept, he has shied from repeating their exact language, which talked of “deep remorse and heartfelt apology” for Japan’s colonial rule and aggression during World War II, including coercion of women into sexual slavery in military brothels.

Such wording expressing apology for Japan’s wartime aggressions was repeated by Prime Minister Junichiro Koizumi in his address at the Asian-African Summit in 2005. Many of the Asian countries attending the summit were invaded by Japan. 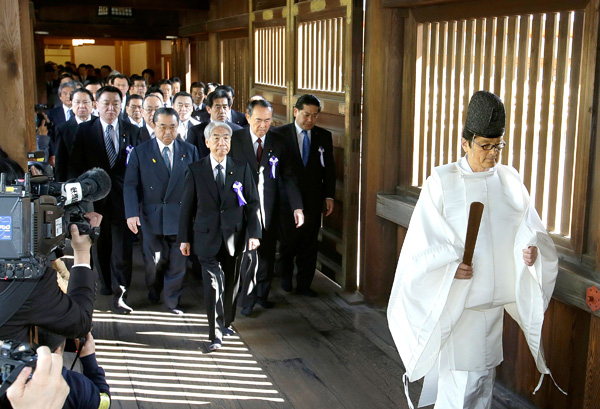 Abe’s speech has been closely monitored because it is considered a practice run for a statement in August to commemorate the 70th anniversary of the end of World War II.

Representatives from over 90 countries including over 30 world leaders such as Chinese President Xi Jinping joined together in Indonesia for the Asian-African Conference, which commemorates the 60th anniversary of the first meeting in Bandung, East Java, in 1955.

In a BS Fuji television interview Monday, Abe said he does not feel it necessary to repeat the words of apology for Japan’s wartime actions because he has already declared that he would “uphold” statements by previous leaders, including the landmark apologies for Japan’s wartime aggression made by Chief Cabinet Secretary Yohei Kono in 1993 and Prime Minister Tomiichi Murayama in 1995.

Abe’s address to a joint session of the U.S. Congress in Washington scheduled for April 29 is also likely to give an indication of what he might say in his speech to mark the 70th anniversary of the end of World War II on Aug. 15.

Relations between Japan, China and Korea have suffered from the right-wing Abe administration’s evasion of wartime responsibilities and whitewashing of history.

The Korean Ministry of Foreign Affairs expressed its “disappointment” that a group of over 100 bipartisan Japanese lawmakers visited the controversial Yasukuni Shrine in Tokyo for an annual spring festival earlier Wednesday.

On Tuesday, Abe sent a ritual offering to the shrine, which honors 14 Class-A World War II criminals among war dead, under his name as prime minister.

In December 2013, Abe visited the Yasukuni Shrine, a move criticized by Seoul, Beijing and Washington.

“Even 70 years since the end of the war, responsible figures in Japan continue to send ritual offerings and paying respects at the Yasukuni Shrine,” the Korean Foreign Ministry said in a statement, “a symbol of its past imperialism and history of invasion. This directly shows that Japan still is not facing history squarely.”

American lawmakers and scholars have encouraged the Japanese government to proactively address its historical issues.

A group of five U.S. lawmakers released statements and made speeches in Congress Tuesday evening encouraging Japan to recognize its wartime aggressions and to use the U.S. visit as a platform to do so.

Rep. Mike Honda of California said that Abe’s speech to the Congress is an opportunity for him to make a “full, unequivocal and formal apology on behalf of the Japanese government” and do justice to the victims of sexual slavery by Japan’s military.

He criticized the Abe administration’s historical revisionism in regards to the so-called comfort women issue both in the United Nations and in its history textbooks.

He said that “given these continued revisionist attempts, for every step forward toward peace and reconciliation, the government of Japan takes two steps back,” and added, “enough is enough.”

American media have also expressed wariness of Abe’s upcoming speech to Congress, and have emphasized that the Abe administration needs to address historical issues with sincerity.

The New York Times published an editorial, “Shinzo Abe and Japan’s History,” on Monday that emphasized the success of Abe’s speech depends on whether the prime minister “confronts Japan’s wartime history, including its decision to wage war, its brutal occupation of China and Korea, its atrocities and its enslavement of thousands of women forced to work as sex slaves or ‘comfort women’ in wartime brothels.”

Conservative Japanese media including the Yomiuri Shimbun and Mainichi Shimbun likewise called upon Abe to reflect the wording of the Murayama statement such as “aggression” and “heartfelt apology” in his statement in August.

A Yomiuri editorial published Wednesday said that the 70th anniversary of the end of war cannot be commemorated “without historical understanding accepting that Japan was at fault for its aggression” during World War II.