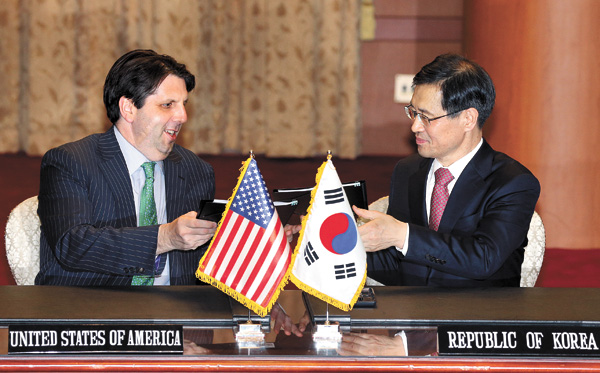 After four and a half years of grueling negotiations, Seoul and Washington signed a new bilateral nuclear cooperation accord allowing more leeway than its predecessor, including a mechanism to enable Korea to enrich uranium and use spent fuel for research purposes.

The agreement - rewritten for the first time in 42 years - was inked by Korea’s chief negotiator Park Ro-byug, ambassador for nuclear energy cooperation, and U.S. Ambassador to Seoul Mark Lippert at the Ministry of Foreign Affairs in central Seoul on Wednesday.

This new civilian nuclear cooperation agreement does not include the so-called “gold standard” provision - which explicitly prohibits uranium enrichment and reprocessing spent fuel - that was the crux of contention between the two countries in the negotiations.

The Korean Foreign Ministry called the pact “a new agreement that reflects Korea’s advanced status” because it includes several key areas that Seoul had been determined to amend since the previous accord.

Korea, the fifth-largest consumer of nuclear power in the world, derives more than a third of its energy from nuclear reactors and expects to run out of storage space for spent fuel within the next decade. The new agreement is expected to help alleviate such concerns.

In this new deal, Seoul will be allowed a mechanism to produce uranium enriched to less than 20 percent, which meets the low-enriched uranium standards for peaceful nuclear usage, according to the Foreign Ministry. The majority of nuclear power reactors use uranium which is enriched to 4 to 5 percent. The agreement will allow a limited low-enrichment program which requires consent from “a high-level bilateral commission” comprising vice-ministerial level officials from both countries.

The previous bilateral nuclear energy pact from 1974 prohibited Korea from enriching uranium because the process can produce plutonium, which can not only power nuclear reactors but also be used to make atomic weapons. It also bans the country from reprocessing spent nuclear fuel rods from nuclear reactors.

The pact is also referred to as the “123 Agreement,” after pertinent sections in the U.S. Atomic Energy Act of 1954.

Korea also will be given long-term consent to do collaborative research into early-stage pyro-processing technology in order to recover uranium in spent nuclear fuel.

The technology enables recycling useful resources from spent fuel, leaving separated plutonium, the key ingredient for making atomic bombs, mixed with other elements. Korean experts claim this process is a more proliferation-resistant option to enable the recycling of spent nuclear fuel. The new nuclear cooperation agreement is expected to enable the two countries to jointly develop new markets in a third country.

“The proposed agreement is one of the most sophisticated and dynamic peaceful nuclear cooperation agreements we’ve ever negotiated,” Ambassador Lippert told reporters after the signing, “and this speaks to the state-of-the-art nature of [South Korea]’s peaceful nuclear program.”

He also said, “The agreement would support the economic competitiveness of the nuclear energy industry in both our countries, promote cooperation on assured fuel supplies and address spent fuel management.”

He added the proposed agreement also “strongly reaffirms the two governments’ shared commitment in nonproliferation and nuclear security as the cornerstone of their nuclear cooperation relationship and would thereby enhance the global nuclear nonproliferation regime.”

When the negotiations started in October 2010, Washington initially pushed for the gold standard clause to be included in the revised agreement, but Seoul negotiated a deal, according to experts.

The term of the new agreement was also shortened to 20 years.

The United States has held onto the gold standard for its nuclear cooperation agreements, legally binding its partners to forswear enrichment and reprocessing, exemplified in a bilateral nuclear energy pact with the United Arab Emirates which took effect in December 2009.

A Foreign Ministry senior official said the agreement “opens a new pathway.” The official continued, “The gold standard not being applied is a considerable advancement. .?.?. It shows that the U.S. acknowledges Korea’s role in nuclear security and nonproliferation, and that it recognizes that applying another provision for Korea other than the gold standard is a lot more effective. We will cooperate to enable the agreement to pass the U.S. Congress amicably as well.”