KPGA struggling to keep up

KPGA struggling to keep up 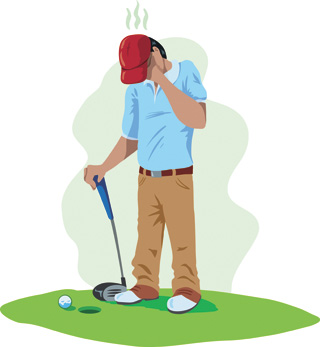 With the men’s and women’s golf seasons now in full swing, the golf community is worried that the men’s tour has too many problems to attract new fans.

The Korea Professional Golfers’ Association (KPGA) Korean Tour opened Thursday with the Dongbu Insurance Promy Open in Pocheon, Gyeonggi. But it’ll be another 50 days until most of the men will be able to compete again, as Dongbu is the sole Korean Tour tournament in this spring. There is the SK Telecom Open in May, but since the tournament is part of the OneAsia Tour, there are only spots for the top 70 KPGA golfers.

The Korean Ladies Professional Golf Association (KLPGA) Tour, on the other hand, is blossoming. In April and May alone, there are eight tournaments with a combined purse of up to 4.5 billion won ($4.2 million).

“We have no specific plan,” said KPGA general manager Park Ho-yun. “We can’t just churn out golf stars like some kind of factory. We are working on it, but it’s not going to improve the situation.”

Experts said that the popularity of a sport in Korea is related to the competitiveness of Korean players on the international stage, and that fans pay more attention to a sport when it has star athletes. Fans chanted the name of Park Chan-ho when he played in the Major League, for example, and of Park Ji-sung when he played in the English Premier League.

But men’s golf has struggled to produce figures like that since the 2000s, when Choi Kyung-ju won the PGA Tour eight times and Yang Yong-eun became first Asian to claim the PGA Championship, in 2009.

Korea’s women golfers, on the other hand, have recently been dominating globally.

“Women golfers are very competitive at the international level and new players arise often,” Park said. “For men, the small number of tournaments and the issue of military service make it difficult to see multiple winners.”

The lack of star golfers is creating vicious cycle for the KPGA Tour. Since 2007, when Kim Kyung-tae, Bae Sang-moon and Kim Dae-hyun rose to popularity, it’s been difficult to find talented young golfers, and so companies have stopped sponsoring events. As the number of events decreased, local golfers have looked to playing in the United States, Japan or in the OneAsia Tour.

There are only 15 KPGA Tour events this year, which is nearly half that of the KLPGA Tour. Furthermore, the KPGA still hasn’t found sponsors for two events in July and August, meaning there is a possibility that there could be no professional event for men’s golf this summer.

“For children who dream to be athletes, girls pick golf as their No.1 sport, but for boys, it’s either baseball or football,” said Park Won, a commentator for JTBC Golf. “In men’s golf, there are no superstars like Park Chan-ho or Park Ji-sung.” 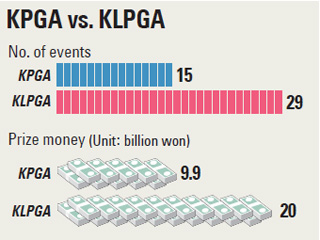 However, some critics are blaming the KPGA’s lack of effort to produce star golfers. They pointed to golfers like Heo In-hoi, Lee Chang-woo and Kim Min-soo, who showed star potential but did not receive enough support from the KPGA.

“Before complaining that players’ lack the competitiveness to become stars, the association should first look in the mirror,” said a veteran golfer who asked not to be named.

The KPGA has been heavily criticized in recent years, particularly after the controversial election of its new leader in 2012. The election devolved into a mudslinging match between KPGA board members that eventually led to a legal battle, and the incident made some sponsors and fans turn their backs on men’s golf.

“KPGA employees seem to be only concerned with protecting themselves,” said an employee who works for one of the KPGA golfers’ sponsors.

Expert also point out that KPGA’s “seed system” is also problematic. The top 60 golfers in prize money earnings get seeds and can compete in all KPGA events. It makes more difficult for rookies and other golfers to participate in the major events as the slots are filled by seeded golfers. As the scale of the men’s tour shrinks, rookies and others golfers have limited opportunities to reach to top.

“Since seeded golfers can continuously play in the events with lot of prize money, it’s almost impossible for those golfers to lose their spot, while rookies have trouble earning an opportunity to compete,” said Kim Tae-hoon, who has a seed.

Others criticize male golfers attitudes, with some amateur golfers who have attended pro-am events complaining that some professional golfers behave arrogantly and are ill-mannered.