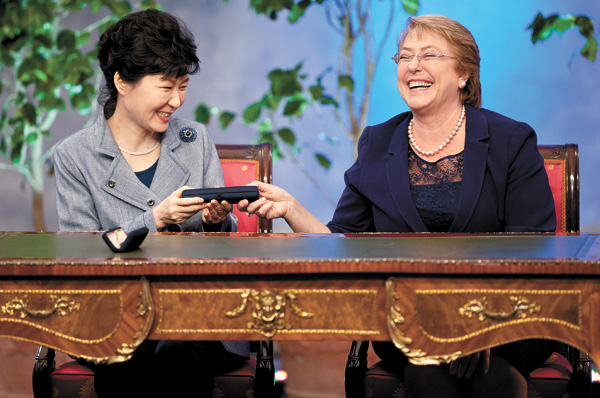 Korean President Park Geun-hye, left, and Chilean President Michelle Bachelet smile before signing an agreement for a stronger economic partnership between the two countries after having a summit at the presidential palace in Santiago, Chile, on Wednesday. The two presidents promised to boost the efficiency of the Korea-Chile Free Trade Agreement, which was the first free trade pact that Korea sealed and went into effect in 2004. The two leaders also agreed to expand the spectrum of economic cooperation to infrastructure construction, defense, science and technology, finance, healthcare, IT and renewable energy. Park asked Bachelet to help the Trans-Pacific Partnership (TPP) members accept Korea as a member in TPP negotiations. Chile is a founding member of the TPP. In addition, a Korean presidential business delegation held a business forum in Santiago to sign business deals worth nearly $222.5 million. [NEWSIS]