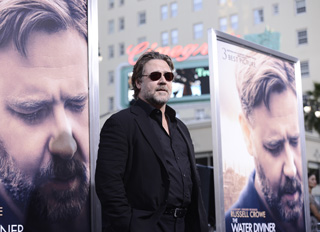 Actor Russell Crowe attends the premiere of the feature film “The Water Diviner” in Los Angeles on Thursday.[AP/NEWSIS]

“It won’t come as any surprise to you, but I’m completely comfortable when all the creative decisions are mine,’’ says Crowe.

The Oscar-winning actor stepped behind the camera for the first time with “The Water Diviner,’’ a classically made epic about a father (Crowe) who travels from the Australian outback to Istanbul in search of the bodies of his three sons, who were killed at the Battle of Gallipoli. The story is at once an adventure tale, a drama and a romance.

Inspired by Australian cinema’s golden age directors like Peter Weir, Gillian Armstrong and Phillip Noyce, Crowe and his cinematographer, Oscar-winner Andrew Lesnie (“The Lord of the Rings’’), weave together an intricate tapestry of striking visuals to both recreate the war and its aftermath.

Crowe talked with The Associated Press in Los Angeles recently about his foray into directing. The remarks have been edited for clarity and brevity.

Q. Was it important to you to do this film independently?

A. Look, it was always an option to go into a studio situation to start with. But it felt to me that in order to have the creative control that I wanted to have and, out of due respect to the story itself, it should be an independent Australian film. That’s the more difficult road to travel, but that’s the one that I chose to take.

You’ve worked with your share of incredible directors over the years. What have you taken from them to inform your own directing style?

For filmmakers who’ve made multiple movies, they have experience, but they only have experience of themselves as a filmmaker. Whereas I’m bouncing around from different skill sets: The organizational ability of Ridley Scott to the precision of a Ron Howard to the artistic sensibilities of a Peter Weir .?.?. to the scope of a Tom Hooper. You learn from everybody. Sometimes you’re learning things that you’re going to take to heart and apply to yourself, and sometimes you’re learning things that you would never, ever do.

You’re keenly interested in all aspects of filmmaking, even down to the lenses.

You have to be. You can have an actor who’s not, but that’s the actor who’s going to waste your day. Here’s a mark, this is the lens size, the camera moves in this way. If they don’t take that information straight away and you have to do multiple takes because they’re ignoring what the camera setup is, or - and I know many actors like this - they believe the camera should only be set up to do what they want to do, that’s a problem. When you’re working in a visual medium where everything is about the framing and composition, you can’t be that way. You’re not going to survive on a Ridley Scott set if you don’t respect what he’s already made decisions about. And you certainly won’t be giving Peter Weir any joy if you’re going against the things he’s got planned. Being technically proficient is a way to assist your director in making his day work.

You put your actors through a very rigorous boot camp involving exercise and nightly history lectures. And yet all were grateful for the experience and the attention you paid to their preparation.

It’s really distressing to be on a set where what the actors require for them to be at their best is the last thing thought of. As an actor myself, when I’m laying out my schedule, preparation is going to be foremost. These days, rehearsal has almost disappeared. You get onto a film set 48 to 72 hours before you start shooting and you’re expected to have done all of your preparation beforehand. I know from vast and deep experience that that’s just not the best way to approach it.

The film has already opened in Australia, where it’s done amazingly well so far. Did you expect that?

Yeah, very surprising box office. The line in the sand in terms of “blockbuster’’ in Australia is $10 million and we’re well past that. .?.?. It’s just the rest of the world we’re concerned about now. There’s a historical aspect in this film that there’s no connection to. Once people are in front of the film, they get taken by the story, they get emotionally involved and it’s a big, epic thing that comes with lots of thrills and some laughs and some hope for the future by the end. However, getting them into the cinema to start with? That is the trick. AP