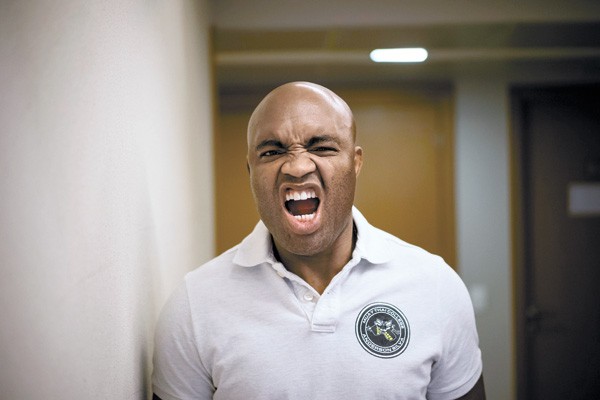 SAO PAULO, Brazil - Mixed martial arts fighter Anderson Silva will fight for a spot in the Brazilian taekwondo team at the 2016 Olympics in Rio de Janeiro.

The announcement was made Wednesday after a meeting with Brazilian taekwondo officials.

Considered one of the best pound-for-pound fighters in the history of mixed martial arts, Silva said he is “trying to give back to the sport’’ in which he began his career.

“I know there will be difficulties, but it’s a challenge I want to face,’’ said Silva, who remains a black belt in taekwondo and an ambassador for the sport in Brazil.

Taekwondo confederation president Carlos Fernandes called it “a historic moment’’ for the sport, but made it clear that Silva will have to fight his way into the Olympics and won’t be helped because of his Ultimate Fighting Championship stardom.

“I know that I would not be able to compete at a high level today, I need to get back to training,’’ the 40-year-old Silva said. “But I have high expectations. You can’t give up on your dreams. It’s the greatest event in the world - every athlete wants to be there.’’

The competitions that will decide which Brazilian fighters will make it to the team are scheduled to begin early in 2016.

One of Brazil’s top-ranked fighters, Guilherme Felix, had previously criticized Silva and called his attempt to compete in the Olympics a “joke.’’

But on Wednesday he wished him luck and said his return “will be good’’ for the sport in Brazil.

Silva tested positive for steroids in January and is trying to overturn a temporary suspension imposed by UFC. He said he is not retiring from MMA, but his focus now will be on taekwondo.

“I always wanted to do this but I never had the chance because of my commitments with UFC,’’ he said in a news conference in Rio.

Silva could be further sanctioned by the Nevada Athletic Commission in the next few weeks.

He said he “will respect’’ any decision by the commission but doesn’t think it will hinder his participation in the Olympics.

The director general of the World Anti-Doping Agency, David Howman, told The Associated Press on Tuesday that WADA policies would not prohibit Silva from competing because his failed drug tests did not come under the WADA code. Howman said the decision on whether Silva could take part in the 2016 Games would need to come from taekwondo’s international governing body.