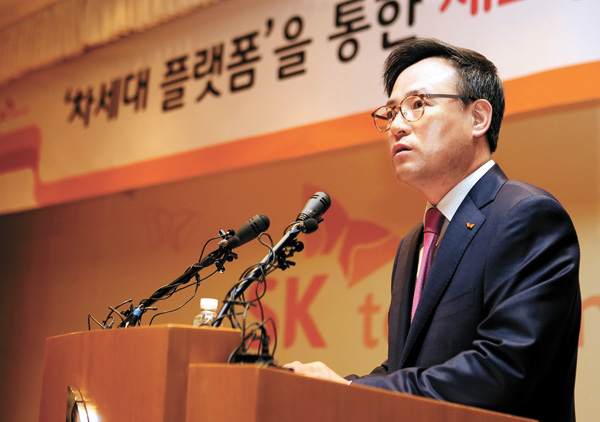 In face of dwindling market share and fast-changing technology, SK Telecom, the country’s top telecommunications provider, announced a set of new initiatives on Thursday to establish itself as a platform operator, going beyond its traditional role of providing a wireless network.

The move is part of the telecommunication giant’s efforts to pursue new revenue streams by connecting its vast customer pool with broader services such as e-commerce, media consumption and entertainment content.

One of the services, dubbed “Life Enhancement Platform,” is designed to provide content tailored to consumers’ interests, integrating e-commerce, communities and content.

“For example, if a consumer is interested in baseball and enthusiastic about a certain team,” said Huh Gwang, manager of SK Telecom, “we will provide him with a package of services that encompass online shopping malls selling baseball uniforms and memorabilia, online and app-based forums with fellow fans and tour information about where a match is going to be held.”

The last format is related to the theme that creates a lot of buzz in the tech industry: the Internet of Things (IoT). SK Telecom’s IoT Platform Service will combine the IoT into its products and network services. The company said it will launch a Smart Home service that allows users to remotely control home appliances, including dehumidifiers, door locks and boilers via smartphones. The service will run on its platform called Mobius.

The company also has a plan to upgrade the Smart Home service to a Total Home Care service by adding home security functions.

The company’s launch of a wearable pet-care device belongs to IoT Platform Service.

The device, called Petfit, fits on a pet’s collar and delivers information via an accompanying mobile application.

Such wearable devices could be bundled with SK Telecom’s network service in the future.

The announcement came as the company faces mounting challenges and unfavorable market conditions. Its market share fell below 50 percent for the first time since it merged with Shinsegi Telecom in 2002. It reported a 49.6 percent share last month, according to the Ministry of Science, ICT and Future Planning.

The downbeat figure is attributed to stiff competition with other carriers like KT and LG U+ and people’s reluctance to use expensive data plans, following the Mobile Device Distribution Improvement Act, which resulted in surging smartphone prices.

Jang acknowledged harsh market conditions and vowed to navigate around them.