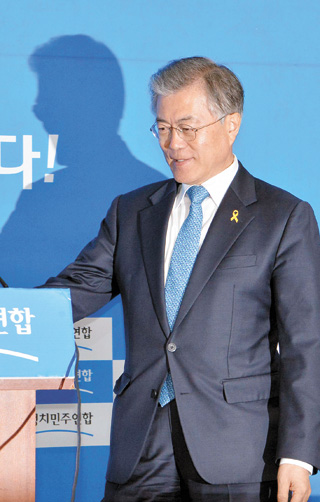 Moon Jae-in, the chairman of the main opposition, prepares to hold a press conference in his office at the National Assembly on Thursday to call for independent counsel to investigate President Park Geun-hye’s campaign funds. [NEWSIS]

The chairman of the main opposition on Thursday declared a war against President Park Geun-hye, his former opponent in the 2012 election, demanding an independent counsel investigation into her campaign funds.

In a media conference that was televised live nationwide, Moon Jae-in, the leader of the New Politics Alliance for Democracy (NPAD), said: “Even if the independent counsel investigation uncovers the truth about her political funds and campaign money, our party has no intention to ask the president about her political responsibility.”

“But she will bring upon herself a crisis over the legitimacy of her presidency unless all the charges raised so far are investigated,” he continued.

For weeks, the inner circle of the Park administration has been grappling with a snowballing corruption scandal involving late construction tycoon Sung Wan-jong, the former chairman of Keangnam Enterprises.

Before his apparent suicide on April 9, Sung claimed that he had given money to top officials in the Park government for years, with some of the funds used to finance Park’s first and second presidential bids - her unsuccessful run in the 2007 ruling party primary and her 2012 presidential election victory over Moon.

The scandal has already consumed one top politician, Prime Minister Lee Wan-koo, who offered to resign earlier this week over graft accusations. Others implicated were former and incumbent presidential chiefs of staff as well as a ruling party lawmaker and the mayors of Busan and Incheon, who served as top managers in Park’s presidential campaign.

Moon, who was narrowly defeated by Park in 2012, said that at the heart of the scandal were her illegal political funds. “The main body of this scandal is the Park government and the Saenuri Party,” the NPAD chairman said. “This is a grave matter. It is directly related to the legitimacy of her presidency.”

He added that he and his party had attempted to handle the scandal carefully and hoped the prosecution’s investigation would shed light on the truth, though their expectations were betrayed.

“The person who confessed to have given the money was arrested, while the people who received the money were shielded,” Moon said. “If this probe continues, the real truth will never be made public. I demand an independent counsel investigation to reveal the truth.”

“The key will be who received the money and how this money was spent,” he continued. “The entrances and exits of this black money must be accurately uncovered. How the money was spent must be revealed, in particular. Only then, can we bid farewell to the politics of money and destroy the chain of corrupt politics.”

Moon also demanded that Lee Byung-kee, presidential chief of staff, step down to allow prosecutors to investigate the scandal impartially. “If the justice minister continues to influence the investigation as he is doing now, the truth will never be found,” Moon said. “Even if an independent counsel is agreed, the prosecution must not stop investigating until the independent counsel probe begins.”

Moon also attacked Park’s integrity, citing the ruling party’s history of receiving illegal funds. “When she was the chairwoman [of the Grand National Party, the predecessor of the Saenuri Party], Park moved the party headquarters into a makeshift tent and promised to end corrupt politics,” Moon said. “But she and her associates were chained by corrupt politics again during the course of her election and even after victory.”

The opposition leader added that the president should present a clear and detailed roadmap to establish a legal and systemic mechanism to reform politics after she returns Monday from her 12-day trip to Latin America. “You made many promises during the election,” he said. “But hardly anything has been accomplished.”

“My party and I have no intention to beg for an answer from the president,” Moon said. “If she ignores our demands, we will start a war against corruption. We will do so fearlessly, and I hope the Park administration and the Saenuri Party won’t be the main enemy in that war.”

Moon also condemned the ruling Saenuri Party for trying to dilute the scandal by introducing suspicions against the NPAD.

“I can assure you that not a single person in the Roh Moo-hyun Blue House received dirty money in return for a presidential pardon,” Moon said, refuting the ruling party’s accusations that the Roh government offered special favors to Sung, the late businessman.

Moon was the closest ally to the late President Roh. During his presidential term from 2003 to 2008, the current opposition leader served as the civil affairs presidential secretary and then as the Blue House chief of staff.

Sung was pardoned twice by Roh, which supports the suspicion that senior members of the opposition party were also bribed, according to ruling Saenuri Party Rep. Kweon Seong-dong, who has demanded an investigation into those special pardons.

Sung was first convicted in 2002 of violating the political funding law for providing illegal money to the Chungcheong-based United Liberal Democrats. He was pardoned on May 13, 2005. At the time, Moon was the civil affairs presidential secretary.

Sung’s second conviction came in November 2007, when he was found guilty of breach of trust for lending 12 billion won ($11 million) of company money, sans interest, to the developer of the Haengdamdo project. Just a month later, on Dec. 31, 2007, Sung was pardoned. At the time, Moon was the presidential chief of staff.

In a press conference on Wednesday, Kweon said the second pardon in 2007 was particularly suspicious because it was granted despite strong opposition by the Ministry of Justice. The ministry turned down the request for amnesty for Sung four times, he added, yet the Blue House still went ahead and pardoned him.

The Saenuri lawmaker also accused the NPAD of lying about the fact that Sung was released at the request of Lee Myung-bak, who was president-elect at the time.

The Blue House sent a list of people to be pardoned to the Justice Ministry one week before the presidential election in 2007, and Sung’s name was already on it, said Kweon, a former prosecutor who served as the civil affairs secretary in charge of presidential pardons under the Lee administration.

“The ministry rejected the initial request and later opposed Sung’s pardon three more times,” he continued. “Roh approved a list of 74 people, which included Sung, on Dec. 28. And the presidential office ordered the ministry on Dec. 29 to include him.”

Chung Soung-jin, who served as the justice minister under the Roh government when the second presidential pardon for Sung was issued, said the ministry opposed, as granting someone a special pardon twice is atypical.

“Because pardons are the exclusive right of the president under the Constitution, the ministry only provided legal advice,” Chung said. “The ministry’s opposition appeared to be accepted initially, but Sung was added at the last minute. I don’t know why he was added or who made the request.”

On Thursday, a group of presidential secretaries who handled pardons issued a statement in response.

“We are disgusted with the Saenuri Party’s attempt to drag the Roh administration into this scandal in order to cover up their own transgression,” four former secretaries, including Lee Ho-cheol, said in the release.

They added that it was only natural for the president to include politicians and businessmen from both sides of the political spectrum, as presidential pardons are supposed to be issued objectively, disregarding factionalism.

The group also insisted that Sung was pardoned for a second time at Lee’s request as incoming president and urged the Saenuri Party to discuss the matter with him.