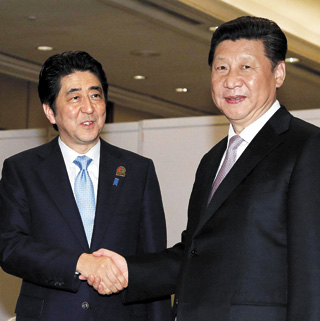 Chinese President Xi Jinping, right, shakes hands with Japan’s Prime Minister Shinzo Abe during a bilateral meeting on Wednesday on the sidelines of the Bandung Conference in Jakarta, Indonesia. [AP/NEWSIS]

Chinese President Xi Jinping and Japanese Prime Minister Shinzo Abe held rare talks Wednesday on the sidelines of the Asian-African Conference in Jakarta, leaving Seoul concerned it may become the odd one out amid the delicate diplomatic situation in Northeast Asia.

The bilateral meeting, which took place during the ongoing Bandung Conference in Indonesia, marked the second time Xi and Abe have met since taking office. Korean President Park Geun-hye, who has yet to hold a summit with Abe, opted for a 12-day trip to Latin America instead.

Abe and Xi met for half an hour, despite thorny diplomatic relations and Beijing’s strong condemnations of Tokyo’s handling of historical issues. The talks took place upon the request of Japan, Chinese media reported, and followed a similar meeting last November in Beijing along the sidelines of an APEC meeting.

Ahead of the conference on Monday, a foreign affairs official in Seoul told reporters that as far as the ministry was aware, a bilateral summit between the leaders of China and Japan was not scheduled, though “it is difficult to predict because such meetings can depend sporadically on the on-site situation.”

However, the Korean Ministry of Foreign Affairs brushed aside concerns that Seoul should be concerned of being blindsided by cooperation between Tokyo and Beijing.

“Japan-China relations and Korea-Japan relations are not a zero-sum game,” Foreign Ministry spokesman Noh Kwang-il said in a press briefing on Thursday.

Noh added that Seoul, as cooperative chair among Korea, Japan and China, has led efforts to realize a trilateral summit at an early date. “Improvement in Japan-China relations will be beneficial to our efforts,” he said.

Xi and Abe’s bilateral meeting took place after the Japanese prime minister did not repeat in his speech at the leaders’ summit a “heartfelt apology” for Japan’s colonial aggressions.

Instead of following in line with remarks by preceding prime ministers, Abe instead stopped short and simply expressed “feelings of deep remorse” over World War II - a move the Chinese Foreign Ministry frowned upon.

This didn’t stop Xi from meeting with Abe, however, or discussing various regional and economic matters, a two-track diplomatic policy practice.

On Thursday, three Japanese Cabinet members paid their respects at the controversial Yasukuni Shrine - which enshrines war criminals among its fallen - in a visit that appeared to have been intentionally delayed until after the two leaders’ meeting.

Seoul has also pushed for a two-track diplomatic policy toward Japan, and Korea’s Vice Foreign Minister Cho Tae-yong emphasized in Washington earlier this month that it will retain a firm position on historical issues while cooperating with Japan in areas that are mutually beneficial, such as in regard to North Korea.

But despite a foreign ministerial meeting with officials from Korea, Japan and China last month, there has been little movement on the part of President Park to meet with Abe.

Experts have pointed out that Korea may have been too quick to brush off the Bandung Conference, an arena for Northeast Asian nations to hold diplomatic discussions. In addition to over 30 global leaders including Xi and Abe, North Korea sent its ceremonial leader Kim Yong-nam to the conference, which celebrates its 60th year.

“Because this year marks the 60th anniversary of the Bandung Conference and we knew that [the leaders of] China and Japan would attend a long time in advance, it would have better for us to pay more attention,” said Namgung Young, a global politics professor at Hankuk University of Foreign Studies.

However, a Foreign Ministry official here noted that President Park had planned her overseas trip to Latin America a year in advance, “thus it is not courteous to the other country to change the schedule.”

Park In-hui, a professor at the Graduate School for International Studies of Ewha Womans University, added that it was inaccurate “to use the expression ‘left out’ after one China-Japan summit.”

“But it is true that Korea has come to a point where it needs to make a final choice,” she said.

In his speech in remarks that seemed directed at Abe’s speech earlier that day, he pointed out that Northeast Asia has witnessed “a rise in historical revisionism,” which is causing “mistrust and tension” in the region.

“Countries that carry liability for their pasts need to face up to their pasts to become responsible members of the region,” Hwang said without naming Japan directly, urging “sincere remorse and an apology.”