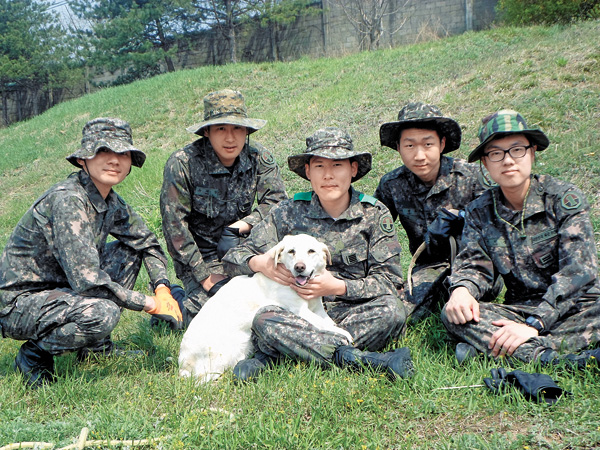 Peace was recently able to begin a new chapter in her life after successfully completing nine years of service in the military.

The 12-year-old retriever, a tactical explosive detection dog and an Iraq War veteran, was an icon in the Korean Army, widely recognized for her talents locating explosives within four to five seconds without failure. Following her enlistment in June 2006, she participated in more than 100 operations at home and abroad.

Peace was deployed to Iraq in September 2006 to serve in the Korean military’s Zaytun Division, a contingent that served in Iraqi Kurdistan until the end of 2008. At the time, the Army said she was the first Korean military dog capable of detecting suicide bomb suspects, due largely to her extraordinary ability to detect various explosives, including C-4, TNT and dynamite.

Her last mission was as security detail at the 7th World Water Forum in Daegu earlier this month.

“Peace was the best of the best among military dogs,” one of the trainers at the 1st Field Army Command’s Military Dog Training Center said. “She always performed her duties perfectly; I always felt reassured.”

Army officials acknowledged that it would be challenging to find a replacement.

After her retirement ceremony on Wednesday, Peace returned to her former guardian, Jeong Ji-yeon, who resides in Yongin, Gyeonggi.

The 24-year-old first met Peace 12 years ago through a puppy walking program. After volunteering to raise a guide dog for the blind, Jeong was assigned to the white retriever, born in 2003 at Samsung Fire and Marine Insurance’s guide dog school.

Over the next 10 months, the tiny puppy grew to become her best friend.

The canine then went through evaluations and was selected to perform as a detection dog for the military due to her extraordinary capabilities and performance, according to Army First Lieutenant Han Hyeong-gu.

After earning an official certificate for explosive detection from the British police, Peace became a model example among Korea’s military dogs.

Jeong contacted the Army after hearing her old dog would soon retire, she said, and the military gladly granted her wish to be reunited with her canine soldier.

According to the Military Dog Training Center, 33 dogs in addition to Peace completed their service and started new lives as house pets with new owners. All served various tenures in the military, ranging from one year to 12.

“From now on, we will hand over about 10 retiring military dogs to civilians every quarter,” a military official said.

Until recently, the military put down retiring dogs via mercy killings or donated them for live medical experiments. However, after the Animal Protection Act was revised in 2013, it banned the practice of medical experiments on military dogs. Another revision on the Act on the Management of Military Supplies in January also allowed the military to hand over retired dogs to civilians.

Currently, 620 dogs serve in the Army, and 101 out of the 181 dogs at the 1st Field Army Command are likely to retire soon. The unit said the Army’s headquarters is accepting applications for their adoption.