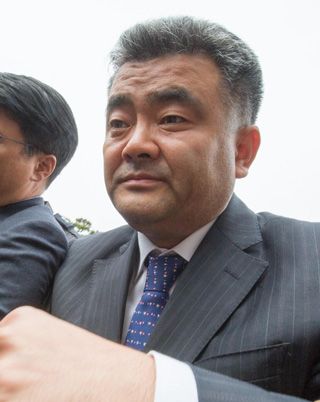 Jung Won-ju, president of the Gwangju-based Jungheung Construction, walks into a Gwangju Court on Thursday for a pre-trial detention warrant review hearing. By Oh Jong-chan

A Gwangju court reviewed the validity of a pre-trial detention warrant for Jung Won-ju, the head of the local construction business who stands accused of embezzling company money, amid rising speculation that prosecutors are targeting opposition lawmakers over potential bribery charges.

The Gwnagju District Court had yet to decide on the request as of press time on Thursday. Though given the exorbitant funds the prosecutors allege the 47-year-old businessman pocketed, it was deemed likely that the warrant would be granted.

Jung is suspected of having embezzled company funds from Gwangju-based Jungheung Construction worth over 20 billion won ($18.46 million) through fraudulent accounting. Jung’s company has assets totaling 5.6 trillion won, with 43 affiliates under its arm.

On his way to the Gwangju District Court’s Suncheon branch for a hearing on the requested warrant, Jung said he would explain himself before prosecutors when asked where the funds were spent.

News that prosecutors were going after the local construction tycoon, who is based in Jeolla, a traditional stronghold of the opposition party, sent a chill through the political establishment, particularly among lawmakers of the main opposition New Politics Alliance for Democracy (NPAD).

While no lawmaker has been summoned for questioning by the prosecution for alleged links to the troubled businessman, speculation has arisen that prosecutors are eyeing the possibility that Jung embezzled the money to bribe influential politicians.

Investigators suspect Jung illegally pocketed company funds through fraudulent accounting in 2007, though they said they have not yet found evidence that the money was used to peddle influence.

“We are now tracking down where the slush funds were spent, and we have yet to find evidence that implicates politicians,” Cho Nam-kwan, a prosecutor leading the case, said on Wednesday.

Prosecutors’ request for a detention warrant for Jung came after the vice president of Jungheong Construction, surnamed Lee, was indicted and detained on April 17.

The investigation into the local construction firm comes as the political establishment has watched itself become further embroiled in an extensive payoff scandal spurred into motion by late businessman Sung Wan-jong.

The construction tycoon left behind a 56-word memo following his apparent suicide on April 9 with the names of eight political heavyweights next to monetary amounts he allegedly gave them.

The scandal most notably zeroed in on Prime Minister Lee Wan-koo, who earlier this week expressed his intention to resign after just 63 days in office.

The subsequent investigation by prosecutors into Jungheung Construction has since raised alarms among opposition lawmakers, who suspect the investigation was politically engineered to contain the fallout from the Sung Wan-jong case.

Fending off those suspicions, prosecutors said they took on the builder after the Board of Audit and Inspection demanded a prosecutorial investigation last June into possible fraudulent accounting.

Investigators will wrap up the investigation by the end of next week.