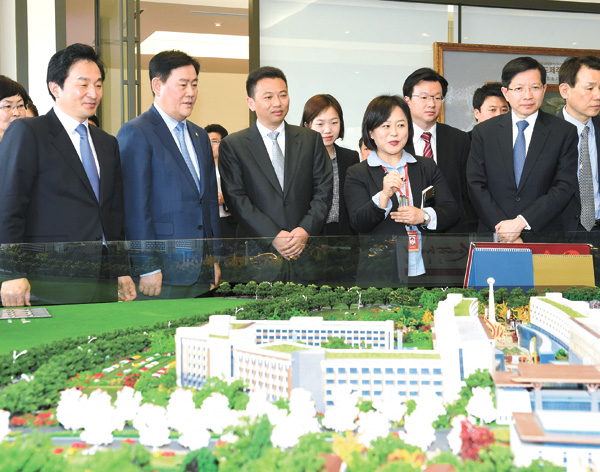 Finance Minister Choi Kyung-hwan, second from left, and Jeju Gov. Won Hee-ryong, far left, visit the Jeju Myths and History Theme Park on Friday to be briefed about development of the Resort World Jeju. It is the nation’s first resort complex, slated to open in 2017. Provided by the Ministry of Strategy and Finance

A little more than a week ahead of Korea Spring Tourism Week, which starts on May 1 and lasts for two weeks, Choi flew to Jeju Island Friday morning to check current status and tourism infrastructure there.

Choi’s visit was aimed at discussing strategies to develop cruise tourism and duty-free shopping as a solution to bring back Chinese tourists, who recently started preferring Japan, which has become a hot destination in Asia because the yen has dropped to its lowest level in seven years.

“So far, the main interest of Chinese tourists was in shopping but that trend is expected to quickly change as the country’s average per capita income rises,” said Choi at a meeting with Jeju Governor Won Hee-ryong, executives of the Jeju Free International City Development Center and major hotels and tourism companies. “Besides shopping, Korea needs to actively develop a wider variety of places to visit and services for sightseers, something for them to see and experience.

“Such an initiative has to begin in Seoul and Jeju, the two most popular tourist spots in the country, and expand nationwide,” Choi added.

According to Korea Tourism Organization (KTO) data, 515,130 Chinese tourists visited Korea in March, 21.6 percent higher than a year before and the highest number for any single country. The Chinese accounted for 41.6 percent of Korea’s total foreign tourists in March, replacing the floods of Japanese tourists of years past.

Besides shopping, Chinese tourists visit famous restaurants, natural landscape sites and downtown areas of cities, according to another survey done by KTO in 2013.

The first step of revitalization is expanding infrastructure like hotels, duty-free stores and cruise liner facilities, according to Choi. He said the Ministry of Strategy and Finance will announce detailed tourism industry development plans by June.

He unveiled parts of the plan, which includes an inner-city duty-free store for Jeju as large as those in Seoul, and expansion of Jeju International Airport. The Jeju airport’s landing strips are being used 34 times per hour during peak times.

The plan also includes an easier tax refund system for tourists. An increasing number of tourists are trying to get value-added tax (VAT) refunds at the Jeju airport before leaving the country, causing crowds. So far, tourists were able to get VAT refunds without their receipts being checked for purchases under 10,000 won ($9.3). The Finance Ministry is recommending raising the limit to 50,000 won.

A simplified policy is estimated to double the number of tourists who can get refunds without having to produce receipts, which should speed things up and reduce lines at the airport.