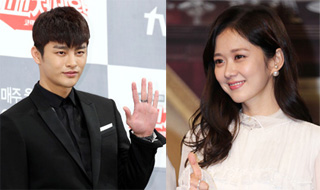 Singer-actor Seo In-guk (pictured left) will team up with Jang Na-ra, a singer and actress, to star in the new KBS2 drama “I Remember You” (working title).

The new TV show, which will release its first episode on June 22, is a romantic comedy featuring a genius profiler, played by Seo, and a police officer from a special investigation team, Jang. In the drama, the two will solve crimes together and fall in love in the process.

Seo received the public’s attention after competing in season one of “Superstar K,” a survival audition program, in 2009. In addition to singing, he first appeared in a drama as a main character in “Reply 1997” (2012).

Jang made her debut as a singer with the album “First Story” in 2011 and started her acting career with the sitcom “New Nonstop” that same year. She is also taking part in Chinese movies and dramas, the most recent being “One-Winged Eagle” (2015).