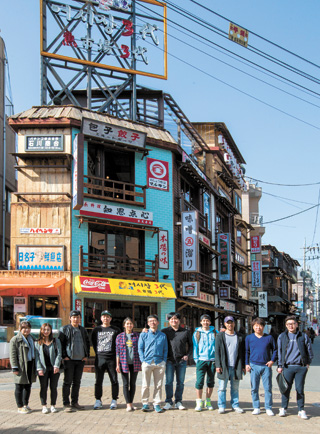 Formerly a residential area until a few years ago, Seogyo-dong in Hongdae, western Seoul, now teems with wooden Japanese-style buildings hosting cafes, restaurants and bars reminiscent of those found in Seoul in the 1970s and ’80s.

The neighborhood is filled with people waiting to get inside crowded izakaya, a Japanese word for an establishment that serves alcoholic drinks and light snacks, and barbecue restaurants.

“The neighborhood looks exactly like one I would expect to see when I go on a trip to Japan,” said Jang Jae-hun, a web designer who was astonished by the area’s new look last week.

Although these buildings look very old, they were actually built just a few years ago.

The izakaya Delicious Kyoto opened four years ago, while Tokyoyaggi, a Japanese-style barbecue restaurant, opened three years ago and Gaehwagi Yojeong, another izakaya, started its business about six months ago.

Gaehwagi refers to a period when Korea opened its door to foreign cultures in the late 19th century. Yojeong means a club visited by upper-class gentlemen back in the 1970s.

These buildings seem old because this was the aim when they were constructed a few years ago.

The wave of retro-seeming bars and restaurants in Hongdae was initiated by Kim Suk from Design Group People, a company that provides interior design and food consulting services.

He started receiving attention after designing the restaurant Maponaru Cold Noodle and the cafe Eunhasu Dabang, which became famous after Korean indie band 10cm penned the song “Love at the Milky Way Cafe” about the retro-style coffee shop that opened in the early 2000s.

In Korean, Eunhasu refers to the Milky Way, and Dabang was a widely used term in the past for a coffee or tea house.

Interestingly, however, when the owner of Eunhasu Dabang first saw the completed design of the cafe, he was highly dissatisfied because the walls and ceilings seemed unfinished. 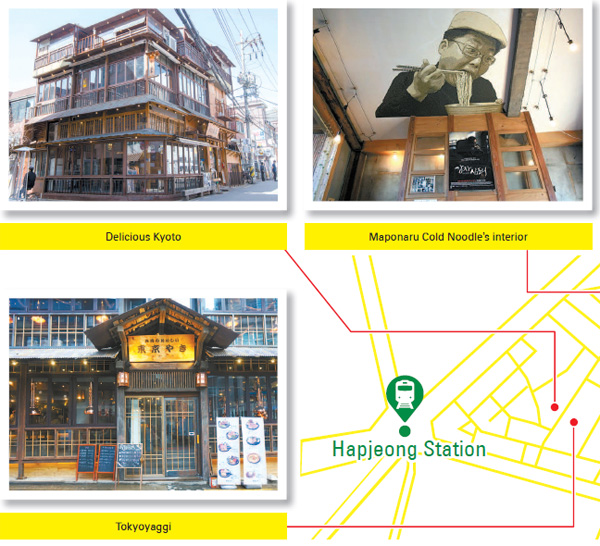 Although the design was unfamiliar when the store first opened, the place soon attracted young people looking for something different.

The area’s landmark Samgeori Pocha, which is located in a building owned by Korean entertainment company YG Entertainment, was also a product of Design Group People.

The first floor of the bar was created to infuse the atmosphere of the streets of the 1970s and 80s while the designers kept hanok, or a traditional Korean house, in mind when creating the second floor.

The bar is decorated with antiques such as old-school bags, dolls and TVs that were purchased from houses about to be torn down.

“Even if design techniques are highly developed these days, in order to make a true vintage atmosphere, it is important to use the actual items from the past,” said Kim.

“Using both old and new items is a good method to make the atmosphere look vintage in a natural way.”

Based on this philosophy, Kim prefers to use what is already available instead of tearing down a building and constructing it anew.

But being old-fashioned does not necessarily always make a venue look retro. It needs to be designed based on thorough research.

According to Kim, before he designs Japanese-style stores, he goes to Japan with the building’s owner a few times to observe angles of eaves and to purchase materials that could be used for the interior.

It is also important to build a story for the store in addition to making its appearance seem more authentic.

“Vintage design is not only about design but also about the combination of the design and the content that a store provides,” emphasized Kim.

Such a look is also gaining popularity in Gangnam, southern Seoul. In contrast to Hongdae, which pursues rougher vintage styles, Gangnam prefers a retro look that is neater and fancier.

The owner of interior design company Modern Craft Song Il-guk, who designed the Italian restaurant Zio Cucina in Bundang District, Seongnam in Gyeonggi, and Melting Point, a cafe in Suji District, Yongin, also in Gyeonggi, decided to focus on vintage interior design after his retro-style cafe received a positive response from customers.

“We are pursuing vintage design that combines antique European design with industrial components from the Industrial Revolution era,” said Song. 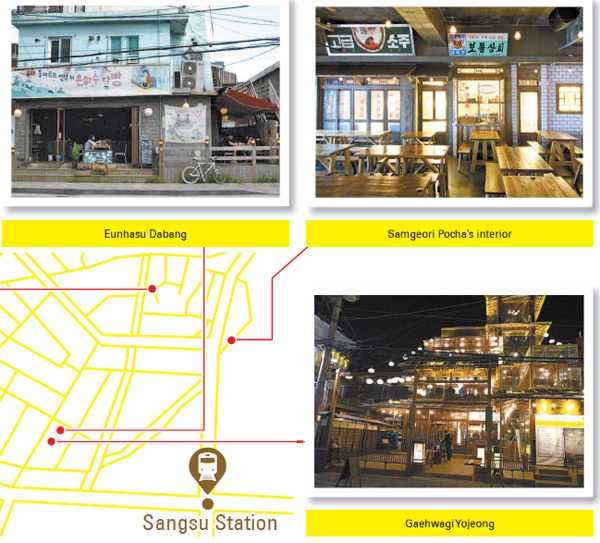 Song’s company produces designs that remodel the style of old European factories dating back to 100 or even 200 years old.

“Vintage style creates a different atmosphere of a shop according to changing sunlight and illumination, which gives customers a sense of new feeling every time they visit the store,” he said.

This type of design started receiving attention overseas about 10 years ago.

According to Park Hye-ju, owner of the antique shop GU, many people are seeking a more analogue style in the current digital era and because of economic reasons, people prefer to leave current designs as they are, adding minimal changes to decor.

“The design of our store made a huge contribution in the success of the store in that appearance and good taste are both required to survive in Hongdae,” said Lim Kyung-jae, owner of the vintage store Delicious Kyoto.

“I like how I can visit the store wearing comfortable clothes and enjoy the unique interior design while having drinks,” said Lee Ho-hyung, a visitor to Hongdae’s Gaehwagi Yojeong.