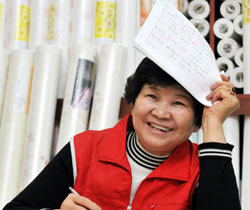 Lee Gi-hwa, 72, talks about her poetic debut on Monday at her shop in Eumseong County, North Chungcheong. By Kim Seong-tae

Lee Gi-hwa has run an agricultural equipment shop in Eumseong County, North Chungcheong, for more than 50 years - an unlikely business for one of the area’s burgeoning poets.

The 72-year-old made her debut writing poetry through a local literature association, and earlier this year was awarded for her contributions as a new writer.

Out of 10 pieces she submitted, five were published last month in The Participant Literature 2015 Spring Edition, the organization’s quarterly publication.

The death of a doctor at a local hospital in her town was what originally inspired her to put pen to paper. After he died in 2012, Lee wrote a poem for him in memoriam, which started her on her way to writing more poems.

“I was so busy for my business that I couldn’t take care of my children very well,” she said. “The doctor took care of them instead of me, treating them whenever they got sick or hurt; when they left town to study in Seoul, he sent them medicines.”

Lee never graduated from high school, but with support from her husband, 75-year-old Sin Ung-gi, she learned more about the art of poetry and how to write them.

Sin encouraged her to write more after reading her piece dedicated to the local doctor, and she later took a poetry class at the senior welfare center in town.

For three years, she wrote two or three poems a week and studied the works of renowned poets and writers. And as she improved, her interest in poetry grew.

But though her official portfolio only spans three years, her experience writing began much earlier.

When Lee was young, she used to write letters for those in her hometown of Goesan County, North Chungcheong, who were illiterate, penning mail to their children or grandchildren who were serving in the military or living elsewhere based on the ideas or guidelines they gave her.

“I appreciate having been awarded this prize,” the 72-year-old said recently, “and to make my debut as a poet. I want to write poems that remind readers of their own memories.”