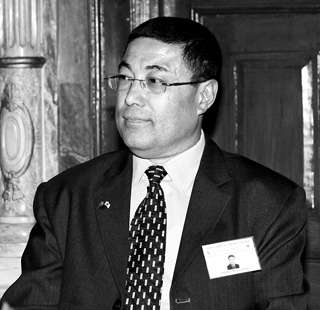 Arun Ranjit often assists many of the Korean residents running their own businesses in Nepal, working as a sort of informal aide whenever they face difficulties.

He shares information about the country’s regulations and introduces them to other Nepalis who may be able to help.

Ranjit is the chief editor of The Rising Nepal, an English-language daily newspaper, and also serves as president of the Nepal-Korea Cooperation Council, a nonprofit organization that helps Korean residents in Nepal with a variety of tasks.

As a journalist, he has written more than 150 stories about Korea, with the subjects ranging from politics to arts and culture. He has also been invited by numerous government bodies and organizations to contribute to discussions on how to improve relations between Korea and Nepal.

Ranjit recently visited the country to attend the 2015 World Journalists Conference and the 7th World Water Forum, during which he sat down with the Korea JoongAng Daily to talk about his work. The following is an edited excerpt:

Q. What led you to engage in issues related to Korea?

A. Because I’ve visited Korea many times, I’ve had the opportunity to meet people from all walks of life. We have had a deep connection, sharing our successes, our individual problems, to those in our communities, be they big or small. Having tried to walk a smooth path for so long has led me to be involved in various issues related to Korea.

Can you tell us more about the committee and its objectives?

The Nepal-Korea Cooperation Council (NKCC) is a nongovernmental and nonprofit organization registered with the Nepalese government. Because it concerns cross-border activities and person-to-person contact, it has also been endorsed by concerned ministries.

It was established in 2007 and is devoted to social service for the benefit and welfare of all Nepalese and Korean people, creating a harmony of a brotherhood and sisterhood, and strengthening existing bilateral diplomatic ties between Nepal and Korea.

This organization is working as a bridge between the people of Nepal and Korea for various activities for the promotion of programs of bilateral importance, and to mobilize volunteers for the welfare of the community and other related services.

Currently, there are more than 150 members in this organization. All of them are energetic, self-motivated personnel and all are well-established personalities in their respective fields and have experienced Korea’s most vibrant and colorful aspects.

The members are involved in various activities that promote bilateral ties between Nepal and Korea that benefit the people of both countries.

In this organization, we have a handful of honorary members from Korea who are also highly established in their respective fields - education, business, tourism, media and mountaineering - all of them have contributed a great deal in Nepal.

What kinds of articles have you written about Korea?

I have explored Korea quite a bit. So, in putting words on paper about my experience here, I have written more than 150 articles about various aspects of Korea, including political and social issues, unification, sports, tourism, culture, the economy and development. .?.?. I have also written several stories about Korea-related events organized in Nepal.

You said you help Koreans operate their businesses in Nepal. How do you help?

Yes, in Nepal many Koreans are doing business, and I have extended my hand to many of them. Being in the media in Nepal, of course, I have a wide network. So using my connections, I’ve helped many Koreans [find solutions] based on Nepal’s existing rules and regulations. We also talk sometimes about opportunities, possibilities and likely shortcomings.

Are there any memorable meetings you recall?

I led a team of well-known Korean friends to meet the president of Nepal at the president’s house in Kathmandu to discuss Nepal-Korea related issues. That was an inspiring and memorable event.

Likewise, leading an NKCC delegation to Korea to meet with ministers, parliamentarians, high-level government officials, entrepreneurs, social activists, educators and media about on a people-to-people level was also memorable.

Many Nepalese and Korean friends ... have praised my involvement. And Nepal in Korea has become an incentive in my life.