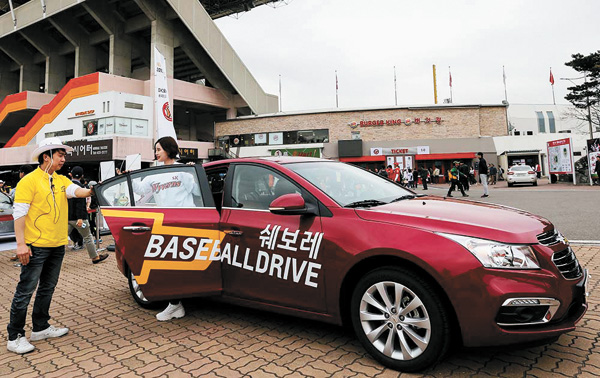 A baseball fan uses the Chevrolet Baseball Drive pick-up service at SK Happy Dream Park in Incheon for the match between the SK Wyverns and LG Twins on April 18. Provided by GM Korea

With more than 8.3 million fans expected to attend Korean Baseball Organization (KBO) League games this season, auto companies are coming up with marketing strategies to capitalize on the excitement.

GM Korea, the nation’s third largest automaker that manufactures Chevrolet-brand cars, on April 18 held a “Chevrolet Experience Day” event at the SK Happy Dream Park in Incheon, where a game between the SK Wyverns and LG Twins was taking place.

The automaker offered a pick-up service connecting the stadium and nearby subway or bus stations, and offered oil and tire pressure inspections for fans who drove to the game.

The company, which has signed marketing deals with the SK Wyverns, LG Twins, Doosan Bears and Lotte Giants, is having especially big hopes for its “Baseball Drive” program. The company is offering test-drive opportunities of its Chevrolet cars for fans who live more than two hours away from a baseball stadium.

Kia Motors, on the other hand, is already familiar with marketing within the KBO - it is the only auto company to own a team in the league, the Kia Tigers. The affiliate of Hyundai Motor Group last month signed an official sponsorship deal with the KBO in the automobile category, which is its fourth straight sponsorship since 2012.

The deal allows Kia to present its cars during various KBO events including the All-Star Game. Last year, the automaker gave a K5 midsize sedan to All-Star Game MVP Park Byung-ho of the Nexen Heroes, and gave a full-size K7 to regular season MVP Seo Gun-chang of the Heroes. It also gave a Sorento SUV to Korean Series MVP Yamaico Navarro of the Samsung Lions.

It has been offering events for both players and fans. In the Champions Field in Gwangju, the home stadium of the Kia Tigers, the company has been displaying its vehicles at the right outfield green grass zone which is known as the “Home Run Zone.”

The first player who gets a home run in which the ball hits the displayed car will be able to drive one home, while fans who collect the ball that landed in zone or predict the player who makes the hit will be given season tickets to the Tigers.

It also set a special zone on the left outfield at the Heroes’ Mokdong Baseball Stadium in Seoul. If a Heroes player lands a home run in the zone, it will give 500,000 won ($465) to the player and the company will donate 500,000 won to local welfare organizations.

Heroes slugger Park Byung-ho became the first recipient in the event after landing a home run against the SK Wyverns on April 3.