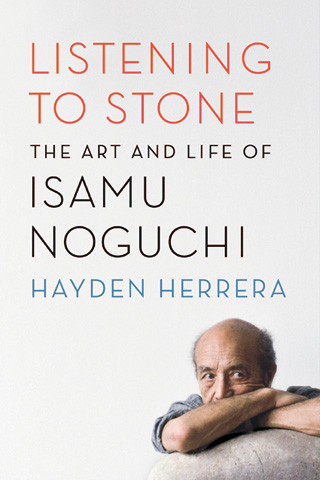 Isamu Noguchi was a difficult man who made art easy to look at. In his life and work, he was riddled with contradictions. Humble and egotistical. Steadfast and temperamental. Listless and energetic. A loyal friend and faithless lover.

Art historian Hayden Herrera, who has written books about Noguchi’s artist friend Arshile Gorky and his romantic partner Frida Kahlo, explores his paradoxical personality in a new, meticulously researched biography, “Listening to Stone: The Art and Life of Isamu Noguchi.’’

Above all, he focuses on the lifelong tension he felt as a result of his biracial heritage. Born in the U.S. to an Irish-American mother and Japanese father, he felt at home nowhere and was an inveterate traveler and self-described world citizen.

“For one with a background like myself the question of identity is very uncertain,’’ she quotes him as saying. “And I think it’s only in art that it was ever possible for me to find any identity at all.’’

And that he did. Blessed - even cursed at times - with vaulting ambition, ferocious energy and an unusually fertile imagination, Noguchi was widely acclaimed as one of America’s greatest sculptors when he died in 1988 at age 84.

Herrera traces his astonishingly productive career from his early days as an accomplished figurative sculptor to his formative apprenticeship with the great modernist Constantin Brancusi and then his later years as a major designer of gardens, monuments and public spaces around the globe.

Along the way she examines his enduring interest in making simple, useful and beautiful objects for everyday living, such as his elegant Akari paper lanterns and glass-topped biomorphic coffee tables. This was the artist who declared that “everything was sculpture.’’

Herrera had to synthesize a vast amount of material to produce this authoritative account: not only Noguchi’s own lucid writing but also that of his unconventional, likable mother and his difficult, grandiose, largely absent poet father. Well-chosen excerpts of letters from and interviews with his wide circle of associates further elucidate his own thinking about art and his place in art history.

However, as the details pile up over some 500 pages, some passages drag.

“Listening to Stone: The Art and Life of Isamu Noguchi’’