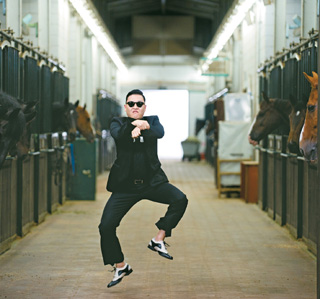 Singer-rapper Psy’s “Gangnam Style,” which was released in July 2012, was selected as the most watched YouTube video, a record measured to mark YouTube’s 10th anniversary last week.

According to major foreign broadcasters, including CBS and CNBC, out of top 10 YouTube videos, the 38-year-old singer’s “Gangnam Style” and “Gentleman” won the first and 9th place, respectively.

Psy and Katy Perry were the only singers who had two of their music videos included in the list. While “Gangnam Style” recorded over 2.3 billion views, its follow-up “Gentleman” received over 800 million hits, a figure recorded on Friday.

Compared to other songs that were introduced as top 10 YouTube videos such as Justin Bieber’s “Baby” and Katy Perry’s “Dark House,” Psy’s “Gangnam Style” received over a billion more views.

Meanwhile, Psy was invited to speak as a keynote speaker in an international conference held by SIGCHI, the international society for studying human-technology and human-computer interaction, on Thursday. He emphasized the role that technology played in making his songs internationally famous.