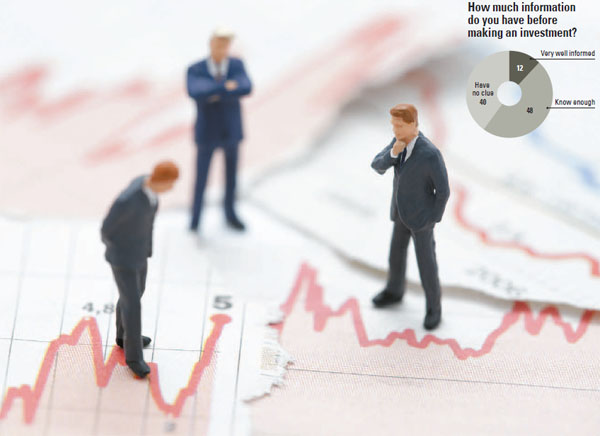 Lee Mi-kyung, a 43-year-old office worker, signed up for an equity fund investing in Samsung Group at the recommendation of a bank employee four years ago. She has since been pouring in 200,000 won ($185) every month, as the banker told her that investing in the nation’s leading conglomerate was a safe bet.

Two years after investing, however, the profit return on the fund was south of 1 percent. She thought of canceling her investment, but at the time, investments were pouring into the fund due to interest in the reorganization of Samsung Group’s corporate governance structure.

After another two years, however, the funds’ profit return had sunk to minus 6 percent.

“I felt comfortable because the fund was investing in Samsung Group, but I didn’t know how much was being invested into where, which was a big mistake,” Lee said. “The bank employee didn’t even explain the details.” 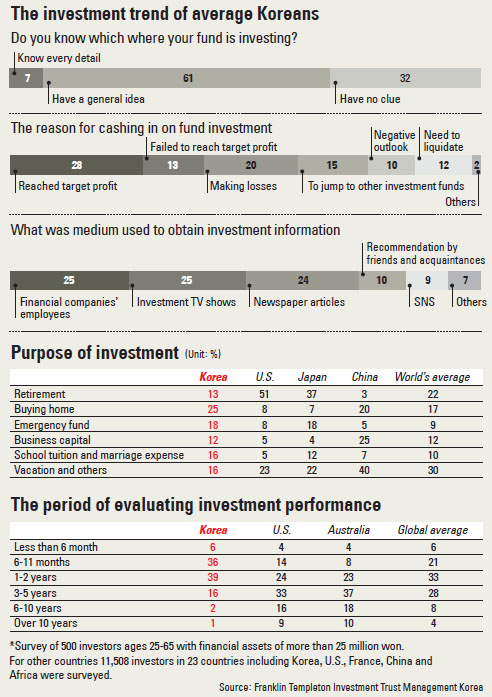 Lee’s situation is not uncommon. According to a recent survey, four out of 10 fund subscribers in Korea don’t know exactly where their money is going.

Franklin Templeton Investment Trust Management Korea conducted a study of 500 fund investors, who have more than 25 million won in financial assets, at the request of the JoongAng Ilbo. The survey took place between Feb. 12 and March 2.

In fact, almost one third of the poll, or 32 percent, said they had no idea what industry, or even region, the funds they subscribe to are invested in.

Equity funds have become popular in Korea over the past decade. But the survey indicates that many investors still depend heavily on the advice of others when making decisions about funds, and that investors are also more focused on short-term performance rather than long-term investment goals.

According to the financial market information provider Zeroin, as of Tuesday investors had withdrawn more than 5.7 trillion won from investment funds this year. Equity funds have been cashing out this month in particular, as the Kospi index has finally broken a three-year slump and begun to shoot upwards towards an all-time record. This month alone more than 2 trillion won has been recollected by fund investors.

“Since the government announced its plans to push companies to increase their dividends [as part of the economic stimulus campaign] last year, large investments have been flowing into dividend funds,” said Hwang Yoon-ah, a researcher at Zeroin. “This suggests that many people lack a personal investment philosophy or goal, and only consider short-term profits by investing in popular funds that have been recommended by people that they know or by financial companies’ employees.”

Despite not knowing much about their investments, investors tend to have high expectations for profit returns.

Many anticipated their investments would rake in a 16 percent profit this year, while some even hope for 20 percent. But few have actually seen profit returns matching expectations.

Among respondents to the Franklin Templeton survey who had already cashed in their funds, only 28 percent said the profits were as high as they had hoped. Those who failed to reach their goal amounted to 33 percent. Among the 33 percent, 20 percent said they withdrew from the funds at a loss.

“It’s not easy to expect a high return of more than 10 percent, especially at a time of such low interest,” said Kim In-eung, head of Woori Bank’s Apgujeong branch.

“Investors could only achieve stable but high profits when they set their goal at 4 to 5 percent and invested in the long term.”

Even when compared to the global market’s investment trend, Korean investors were relatively more focused on short-term profits.

Franklin Templeton’s study also included a survey of 11,008 investors from 22 countries including the United States, China, Japan and even Africa. In the survey, 81 percent of the Korean investors said they evaluated their investment results on the performance made during a period of less than two years. Only 19 percent said they placed importance on an investment that lasted more than three years. This was a stark contrast to global investors, of which 28 percent said they invested in funds for more than three to five years.

As Korean investors were focused more on making a quick profit, they turned out to be less interested in investing for life after retirement.

The most common investment goal was to own a home (25 percent), while investors in other countries were most commonly interested in preparing for retirement (22 percent).

Only 13 percent of the Korean investors said they were investing to prepare for old age. The only countries less concerned with investing for retirement were China, at 3 percent, and Greece, at 6 percent.

“The focus is so concentrated on solving the immediate reality like buying a home that they prefer short-term high return investments,” said Jeon Yong-bae, CEO of Franklin Templeton Investment Trust Management Korea. “As a short-sighted and hasty judgment could lead to investment failure, it is important to prepare for old age by raising the value of assets with long-term goals.”