Pantech is a cautionary tale for start-ups that fly too high, too quickly

Pantech is a cautionary tale for start-ups that fly too high, too quickly 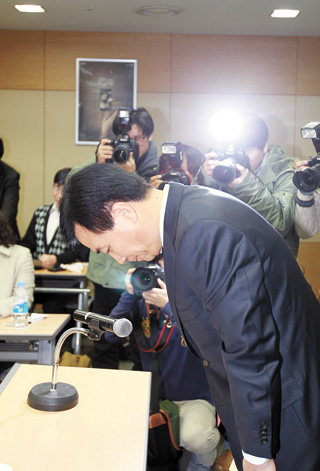 Park Byeong-yeop, founder of Pantech, apologizes for poor management of the company in July. [JoongAng Ilbo]

The rise of phone maker Pantech was remarkable. What began as a small company with six employees grew into the country’s second-largest handset maker at its peak in the mid-2000s - even beating out venerable LG Electronics.

But now the company is on its way to the grave as no legitimate buyer has emerged for the debt-ridden company, which requested to go into court receivership last August.

Efforts to find a buyer fell through three times so far after the Seoul District Court didn’t recognize three bidders as viable last week. With little chance of another round of bidding, the fate of the phone maker will be decided in weeks by creditors.

The dramatic rise and fall of the manufacturer will depress start-ups that once dreamed of emulating the success story of Pantech in a country heavily dominated by the family-run chaebol. 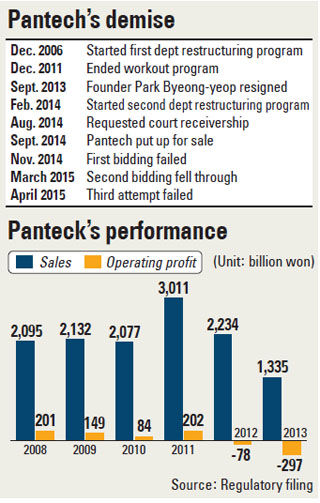 The failure of Pantech is attributed to multiple factors. In 2011 and 2012, the company banked on premium marketing and set the price of its Vega Racer series of smartphone at the same level as Samsung’s flagship Galaxy devices.

The company’s orientation to high-end marketing was an attempt to duplicate its triumphant position in the feature phone market, the precursors to smartphones. Under the catch phrase “It’s different,” Pantech’s Sky brand captured the loyalty of customers looking for stylish high-end cell phones.

In the smartphone age, however, Pantech failed to achieve a sizable market share as competing companies such as Apple and Samsung Electronics came with superior designs, software and better customer service.

“While the early Vega series sold for a similar price as the Galaxy S1 and 2 and Apple’s iPhone, it didn’t have distinctive features to win over customers from Samsung or Apple,” said Greg Roh, a chief analyst at HMC Investment Securities.

“Apple had a fantastic design and user interface and Samsung has a reputation as a reliable phone maker and for great after-care service,” the researcher said, “The Vega has fair specs but not enough to compete.”

“When I use Samsung or LG phones, there were frequent systems upgrades,” said Kim Young-seon, a 28-year-old woman who used the Vega Iron 2 until last year.

“But Pantech doesn’t provide firmware upgrade as often as the other companies. And their after-sales service is poor, which is why I switched.”

Pantech said its smartphone market share was hovering around 10 percent last year. Analysts expect it to plummet as Apple expanded local market share to the 20 percent range with its larger iPhone6.

Back in 2005, Pantech held the second largest market share of 22.4 percent, higher than LG Electronics’ 17.7 percent, according to industry data based on the number of phones sold that year.

From small to big

Established in 1991, Pantech held a unique position in the tech industry as it seemed to be shattering the widely held perception in Korea that only large conglomerates can enter and flourish in the high-value tech business.

Park Byeong-yeop, who worked at an electronic company called Maxon Telecom, founded Pantech in 1991 with six employees. They sold pagers.

The company started boosting its presence in the cellular phone market after buying several handset companies. It acquired Hyundai Curital, the handset unit of chipmaker Hynix, for 47.6 billion won ($44.1 million) in 2001. Four years later, it bought SK Teletech, a handset affiliate of SK Telecom, for some 300 billion won after which it obtained the Sky brand.

The purchases put financial pressure on the company. In 2006, a year after it acquired SK Teletech, the company went under a debt restructuring program that ended in 2011. The company sought to a way out by breaking into the overseas market. Without understanding each local market, however, the phone maker failed to succeed in the global market while the cost of setting up global branches further put Pantech in jeopardy.

Even the CEO of Pantech admitted its failed attempt to go abroad.

“We looked into the factors leading to the failure in the global market,” said Lee Joon-woo, the CEO, during a press briefing last July. He took over the company after founder Park resigned over the dwindling financial resources and flagging sales.

“We churned out the same flagship phones as in the domestic market. We only tried to make differentiated phones and didn’t pay attention to marketing strategy that would make Pantech stand out over other phone makers.”

The press conference was held as the CEO begged the country’s three mobile carriers to accept a debt-for-equity swap to save the company.

Creditors of the country’s smallest mobile phone vendor delayed a deadline for the mobile operators to decide on Pantech’s proposal to swap 180 billion won worth of debt for equity to July 14. It was the second delay of a deadline that was originally set for July 4.

The carriers - SK Telecom, KT and LG U+ - have remained mum on the suggestion.

Following the refusal, the company was put up for sale in September.

The CEO acknowledged Pantech failed to keep pace with competitors.

“Over the past years, we weren’t in good shape because we failed to keep abreast of the latest technology and consumer trends,” the CEO said.

Hanging in the balance

A local court said last week the third attempt to sell the troubled company fizzled because the bidders couldn’t turn it around.

“After reviewing the letters of intent from the bidders, we concluded that they are not viable bidders because they lacked practical willingness and capabilities to purchase Pantech,” the court said.

This was the latest in a series of aborted efforts after bidding by an American consortium foundered, according to Samjong KPMG and KDB Daewoo Securities, the organizers of the deal.

Samjong KPMG estimates that Pantech’s standing value is 110 billion won, smaller than the estimated liquidation value of 150.5 billion won. Pantech came close to being purchased by the U.S.-based consortium led by equity investor One Value Asset Management, but the deal was cancelled last month after the potential buyer failed to remit a payment on time.

The Seoul Central District Court is now expected to begin liquidation procedures, according to experts.

In the second round of bidding, One Value Asset Management submitted a letter of intent in February.

However, the American investor kept delaying transferring any money, citing a regulation in the United States.

Within the troubled company, employees are afraid of losing their jobs.

Pantech employs 1,700 workers. Among them, 70 percent are researchers. After six quarters of losses, it has delayed paying salaries for some workers.