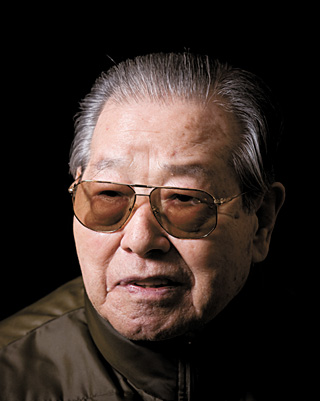 Kim Jong-pil, a two-time prime minister, said that Japanese Prime Minister Shinzo Abe “needs to face history squarely and reflect and apologize with a sincere heart,” as well as take example from his grandfather.

President Park Chung Hee’s right-hand man, who helped pave the way for the Korean-Japanese settlement, told the JoongAng Ilbo on Sunday it is “regrettable that even after the end of World War II, Prime Minister Abe couldn’t learn lessons from the generations of his father and grandfather.”

This year marks the 50th anniversary of normalization of bilateral relations between Japan and South Korea on June 22, 1965.

His remarks come as Abe kicked off his weeklong visit to the United States on Sunday, which will include stops in Boston and Washington.

“You can’t just interpret it suitably. The Japanese citizens are people who hold great intelligence. Prime Minister Abe needs to objectively show remorse and needs to draw out proper awareness in order to advance both countries.”

There is interest to see how Abe will address Japan’s World War II aggressions on such a public stage. Abe will give an address to a joint session of the Congress, the first for a Japanese prime minister, and visit the Holocaust Memorial National Museum in Washington. He will also go to Arlington National Cemetery and pay respects to Japanese-American war dead. Kim pointed out that eight decades ago, the Japanese Imperial Army conducted its invasion on Manchuria (1931-32), the Second Sino-Japanese war (1937-45), as well as World War II in Asia and the Pacific (1941-45). At that time, he said the Japanese people were “recklessly dragged along by militarism.”

The founder and director of the country’s first spy agency, the Korean Central Intelligence Agency (KCIA), added, “The tendency of Japanese society to be dragged along without objection to the nation’s leaders’ wrongful acts can be seen again now.”

Kim recalled that Kishi told him that “Japan tormented Korea. I apologize as a Japanese. Though the past days were not good, I wish Korea and Japan will holds hands and that Korea will be revived.”

The late Kishi, who served as a minister of industry in the war cabinet and had been accused by the United States of being a Class-A war criminal, served as prime minister from 1957 to 1960. Kim added that he was very close to the current prime minister’s father, Shintaro Abe, a former foreign minister in the 1980s, and described him as “a very good person who avoided hurtful words or actions.” Kim said that the elder Abe “tried in his own way to better Korea-Japan relations.

“Abe seems to have a very different personality from his father.”

A decade ago, during the 40th anniversary of the establishment of bilateral ties in 2005, Kim went to Tokyo and gave a lecture to 1,000 officials.

At that time he said that Hirobumi Ito, former Japanese prime minister and first resident-general of Korea, “could be seen as a veteran statesman of the Meiji Era to the Japanese, but to Koreans, he was an instigator of aggression against the Korean people.”

He emphasized then that it is important to apologize with a sincere heart, as the Japanese government claims the Dokdo islets in the East Sea as its own and that Korean women voluntarily served in military brothels during World War II.