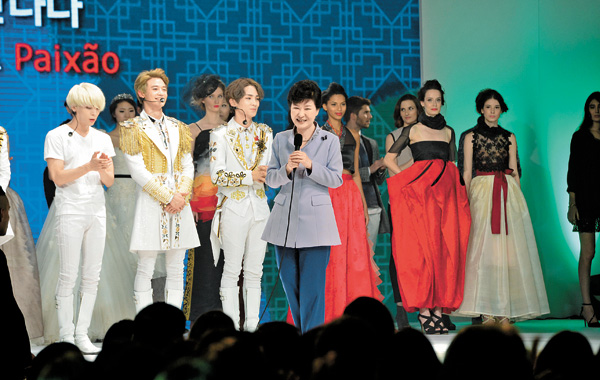 President Park Geun-hye, center, gives a pep talk to designers and performers at the K-pop Fashion Show organized by Arirang TV at a hotel in Sao Paulo on Saturday (local time). Brazil was the last stop on a 12-day trip to South America. [Joint Press Corps]

Completing a 12-day trip to Colombia, Peru, Chile and Brazil, Park is scheduled to arrive in Seoul today.

According to the Blue House, the president signed 78 memorandums of understanding (MOU) in a variety of sectors, such as increasing recruitment of Korean youth in South America and expanding the telemedicine market.

In Colombia, she urged speedy ratification of a Korea-Colombia free trade agreement and discussed ways to expand e-commerce.

President Park Geun-hye arrives at the presidential palace in Brazil to participate in a welcoming ceremony on Friday, local time. Hyundai Motor’s bulletproof Equus sedan was used as the official state car, which was the first time the president used a domestic car on her overseas trip. [Joint Press Corps]

During a summit with the Peruvian president, Park promoted Korean-made FA-50 light combat aircraft for Peru’s $2 billion military procurement program, according to the Blue House.

At a meeting with Chile’s president, she asked for young Korean entrepreneurs to be included in Start-up Chile, a government program that provides promising foreign entrepreneurs with $40,000, a one-year residence visa and tax benefits.

In Brazil, Korean government officials signed an MOU to share the Park administration’s creative economy policy strategy and introduce the Center for Creative Economy and Innovation.

Among the most significant outcomes of the trip were one-on-one meetings between Korean companies and South American buyers, according to the state-run Korea Trade-Investment Promotion Agency (Kotra).

Kotra said representatives of 76 Korean companies who accompanied the president had a total of 745 one-on-one discussions with local buyers and won contracts worth a total of $646 million.

The Korean businesspeople, many of whom came from small and midsize companies, said the bilateral meetings were rare opportunities for them to meet and attract potential buyers, overcoming the physical distance and language barrier between Korea and South America.

Local buyers who met with Korean businesspeople at the summits also included those from neighboring countries, such as Ecuador, Venezuela, Paraguay, Argentina, and Mexico, according to the Blue House.

Products in the contracts ranged from ICT devices to medicines and industrial devices, Kotra said.

In addition to the individual meetings, the Korea Chamber of Commerce hosted a largest-ever business forum in Sau Paulo to discuss ways to boost cooperation with Brazil in new sectors, such as renewable energy, infrastructure construction and the automobile industry. Park also attended the forum that attracted about 250 businesspeople from the two countries.

“Brazil also had an experience of making economic growth surprises in 1960s, about 10 percent average annually,” Park Yong-maan, chairman of the Korean Chamber of Commerce said in his welcoming speech at the summits. “Also, Korea had a similar history of achievement from nothing [after Korean War], so let’s make the second economic miracle together, between the two countries, with complementary economic structures.”

Paulo Skaf, president of the Federation of Industries of the State of Sao Paulo, also said in his speech, “We hope the cutting-edge technology skills of Korea will be helpful for the development of Brazil’s manufacturing industry.”