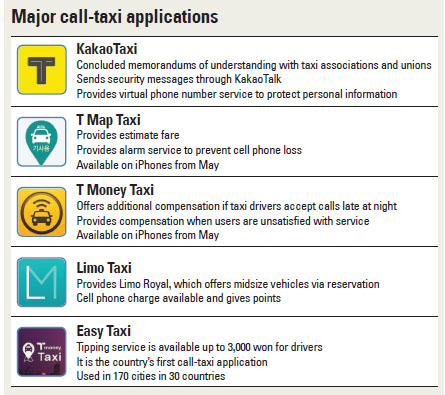 After midnight on April 4, a crowd of Friday night revelers stood waiting for taxis at Sinchon Station’s exit No. 1 in western Seoul. Few were having luck finding a cab, however, with most of the drivers solely seeking long-distance customers.

When a JoongAng Ilbo reporter turned on the KakaoTaxi application, which brokers cab drivers for passengers, the application automatically set the point of departure as Sinchon Station based on her GPS information. She proceeded to enter her destination, Sillim-dong, and pressed the call button.

It only took 10 seconds to receive a confirmation message complete with the driver’s photo, name and real-time location. She then received a call from the driver, who arrived at her location in three minutes.

After getting in the taxi, she turned on the application again and sent security messages to her friends on KakaoTalk that provide details of her ride.

“It’s very convenient to locate passengers because the application is compatible with my navigation system, and it’s also nice to have decent passengers, not drunk ones,” Kang said.

Uber was previously considered a leader in the industry, followed by global venture companies and small start-ups like Easy Taxi and Limo Taxi.

But the competition became much more intense as large domestic enterprises like DaumKakao, SK Planet and Korea Smart Card jumped in.

Among the newest domestic competitors, DaumKakao has led the way, with KakaoTaxi, the call-taxi application service on its popular social networking service KakaoTalk, attracting 37 million users following its launch on March 31.

So far, these applications have proven attractive to drivers as well as customers.

For KakaoTaxi, drivers are not required to pay membership fees for registration or an additional payment to the service provider for each ride.

“A goal in the taxi industry is to increase the percentage of call taxis to that in advanced countries, say 70 percent, and I expect mobile taxi applications will help us achieve that goal,” said Lee Yang-deok, the director of Korea National Joint Conference of Taxi Association.

As of last year, 138,000 of the country’s 254,000 taxis had registered with mobile call-taxi application services, according to Neilson Korea, a survey company.

The Seoul Metropolitan Government expects those apps will result in better taxi services in the capital city, where drivers are notorious for their often unfriendly attitudes and refusing customers.

“The sense that they can get a cab when they call will drastically improve the image of taxi services,” said Yang Wan-su, who heads the Taxi and Logistics Division of the Seoul Metropolitan Government.

However, one criticism is that the applications will still not be able to prevent drivers from refusing short-distance passengers, and that customers might abandon the service if they suddenly have to pay an add-on charge for the ride.

“We accept all calls from Kakao-Taxi without checking the destination because it’s free,” said one taxi driver surnamed Yu. “But I think [drivers would] be unlikely to accept short-distance calls [if we have to pay for the service provided by the application].”

“We provided the service for free to preoccupy the market share,” a DaumKakao official added, “but we are mulling over when to provide it at a cost.”